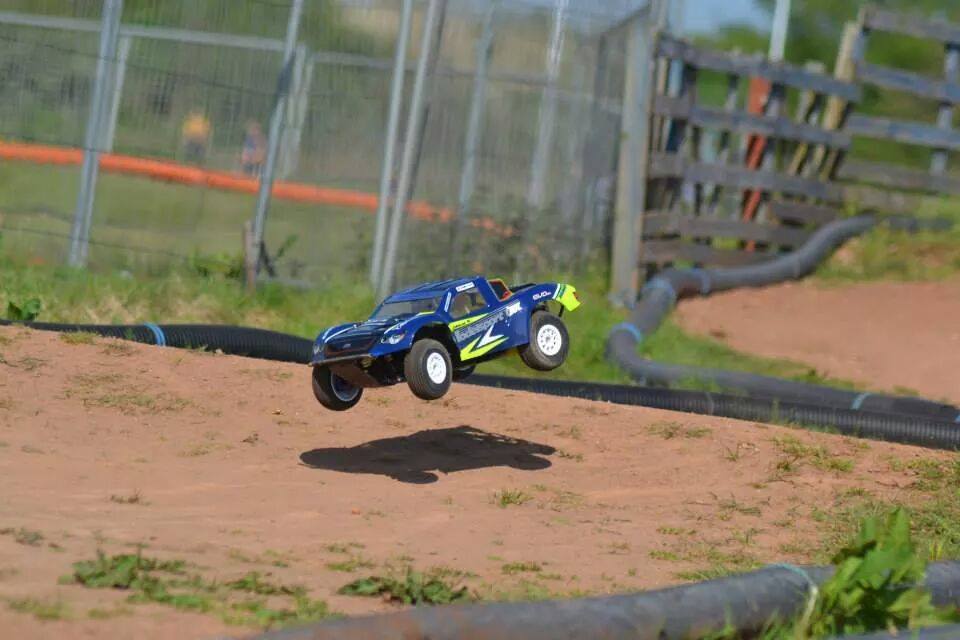 Pete and I headed up Saturday for a shakedown and practice session to get used to the track and get the cars set up, the track seems absolutely massive compared the indoor track we had been used to and it took a good 2 or 3 packs through the car before I had my eyes tuned in to the distance over the back of the track.

The track is a 1/8th dirt track and had been freshly rolled and had cooking oil soaked into the corners and jump take off’s the week before, the grip level was surprisingly high if you stayed on the racing line, but if you drifted wide into the dust it was a complete drift fest on the dusty dirt. Weather was awesome, clear blue skies and around 22/23C so perfect for racing.

Practice sessions went OK and nothing broke, I had some pretty big crashes though whilst trying to do the “double” jump in the middle of the track, I had the power to make it, I was just missing the skill required.

Qualifying Round 1:Started off pretty well, I concentrated solely on not crashing as opposed to aiming for outright speed, the car was handling nice apart from the jumps however I was limited with suspension setup options as I only had the stock springs to choose from. I finished 2nd place and a lap behind Paul Avery. My lasting memory from this first round was the immense nerves and adrenaline I was experiencing up on the rostrum. First time at a national level event, first time on the dirt, first time on a 1/8 size track and first time on such a high rostrum. I suffer from a mild amount of Vertigo so in addition to to the nerves and adrenaline I was having to stop myself from thinking “damn this is high up”.

Qualifying Round 2:  Working again on the theory of “not crashing” I made good progress and mostly stayed out of trouble and avoided many crashes by opting to take the double jump as two singles, this paid dividends at the end of the round as I managed another 2nd finish and this time on the lead lap, completing 10laps in the 6mins.

Qualifying Round 3: After two 2nd place finishes in the first two rounds I decided to go for the double jump with the aim of getting to an 11lap finish, it didnt go so well and lost a lot of time whilst trying to clear the jump. It was very tricky as there was very little run up unless you nailed the perfect line on the grippy side out the turn just before it which was a left right chicane over the landing of another jump not used on the layout we were running. In hindsight I was not running the correct size pinion for the track and ran out of throttle to keep the nose up once in the air. I finished 5th place on 10 laps.

Qualifying Round 4:  Damage limitation time, finished 2nd place. I had to go on the “no crashing” theory again as I thought an A Final place was slipping away!

I was chuffed to bits when the Finals lists went up as I saw my name on the bottom of the top list! A-Final P10, so I would start each of the 3 finals in the last spot so I had nothing to lose by going for it. The pace was immense compared to the qualifying rounds as I was now with the fast boys. I struggled in the first leg but still managed to finish ahead of where I started in 9th place.

LEG 2: A further improvement from my starting position, I finished 8th place, I was running further up the field but had some dodgy moments where the my car took a shine to the track pipe a few times.

LEG 3: Finished 7th place after I retired on the penultimate lap after a hinge pin backed all the way out causing the the front steering hub to come off the wishbone? A rookie error on my part and especially disappointing as I was running 4th for most of the last final.