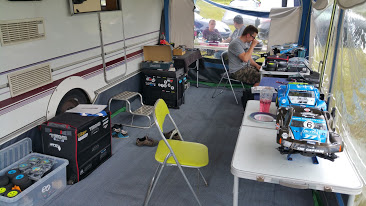 Round 3 takes us south all the way down to TORCH (Titchfield Off Road Club Hants), a fair old drive for most but we had a strong turnout of drivers for both 2 and 4wd classes as well as having an open heat for the locals.

Preparation for this round was light as the trucks were still in great shape after the clean up after RD2 at Telford. We traveled down on the Saturday and got pitched up in the field behind the track. The rain stayed away for the most part on Saturday but raceday was to be a different story.

The track was awesome, a nice flowing layout that was also pretty fast with some tricky jumps, particularly the one just in front of the rostrum, coming off the corner tabletop you was able to gather so much speed in a very short distance which led to a lot of trucks “overshooting” the landing with some epic crashes as a result.

In the wet the track generated some good grip and in the dry it was very grippy and quite abrasive, I completely used up a brand new set of mini-pins in just 4 runs! We saw a couple of Motor failures with both Eddy and Karlos suffering Rotor damage on the Hobbying 4700 and Tekin Pro4HD on the same day, luckily we had enough spares around us to keep everyone moving. The new generator was a peach too, super quiet, powerful and amazingly good on fuel, we normally get through at least 10 to 15ltrs a weekend, this one only drank about 7ltrs #winner

Qualifying was tough, the pace has suddenly seemed to have made a jump this season and keeping with the front runners is getting more difficult each round, ive no idea what happened at ARC where I was miles ahead but that table has well and truly turned with Lewis Williamson and Darren Boyle setting the pace since. I gave it my best and the nerves held me up in the first round however a very close finish behind Lewis with Darren taking the top spot. It didnt get any easier, I took 3rd again in rd2 with Eddy just behind in 4th as was the case for rd1.

Rd3 came round and I finished 3rd again this time behind Eddy in 2nd with Lewis 1st, Darren had some technical issues and never made the round, in rd4 normal service was resumed with Lewis taking the win, Darren 2nd and myself again 3rd and a surprise appearance from Karlos in 4th ahead of Eddy !

Results in the finals were as difficult to achieve as they were in qualifying. Starting 3rd on the grid with Eddy Rowland alongside in 4th; mixed weather all caused some headache with tyre selection, most running the Schumacher Spiral tyres for best results. I took a beating in the first round and slumped to 7th in the A Final meanwhile Eddy had a stormer and took the LEG1 WIN!!!. LEG2 was better with a hard fought battle with Eddy I would finish up in my lucky 3rd spot behind Darren and Lewis once more, but this time Eddy behind me in 4th. Leg 3 would see me take a 2nd place finish with Eddy close behind in 3rd place, Lewis took the Leg3 win with Darren in 4th place. At this point I thought I had 3rd spot covered with a 3rd/2nd best two result, forgetting Eddy took a win in the first leg so he pipped me to the last podium spot again with a 1st/3rd best two result.

A big congratulations to Eddy Rowland, drove well all day, kept it cool and capitalised on the opportunities that presented themselves on the day.

Big shout out to Karlos, a strong result taking 5th place overall, his pace is improving as each rounds comes and goes, it wont be long before he joins the foray at the front.

Pete the Stuntman done us proud with some epic jump action, taking 3rd on the podium in the B Final adding more silverware to the collection.

A well run event at a fantastic club with a great venue, everyone enjoyed themselves despite the weather being pants at times. The Captain extending his trophy drought for another round but keeping 2nd place in the overall rankings going into the the 4th round at the all new Cosford Raceway hosted by the boys from the Coventry Model Car Club. Cant wait for RD4!!!

Meanwhile I did manage to get some footage of the 2wd Tekno Conversion that my Lewis is running – See below.