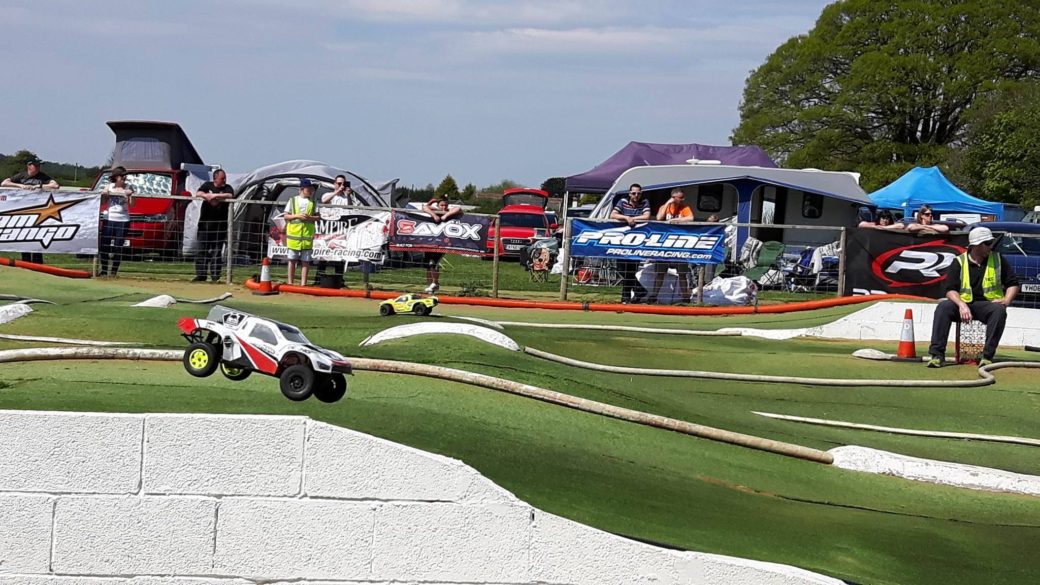 Rd 2 took us to sunny Telford in Shropshire, and specifically to the Oaklands Raceway, a beautifully prepared 1/10 Astro track. We arrived mid morning on saturday to get the caravan and awning/pit space all set up. The weather was lovely, a balmy 22c and sunny for most of the day until we had some rain early saturday evening, but not before we managed to get the BBQ done and dusted 🙂

I won here last season so I was confident I had the pace to do well here especially after the win in RD1 at ARC Raceway. Practice went well consisting of 3 full pack runs to gauge the grip levels and get the car setup. The car felt good from the off using the base setup from ARC just needed a stiffer rear spring to make it feel compliant.

Again it was all about tyres, I tested trimmed minispikes on saturday and while it felt OK it was just too edgy when pushed a little harder, so I switched to Mini Pins all round and it was much better, I practiced on the newer set with just a couple of outer rows off on the front pair, it was still edgy but felt planted with lots of traction off the corners.

As is now customary at Telford all the guys got together to chew the cud on all things RC and racing over a few beers in the evening, a great time had by all once again.

I Apologise for the lack of media content from race days recently, with my Lewis now racing it means I now have 2 cars and 2 lots of batteries to look after, along with occasional refferee duties and being the driver rep, there doesnt appear to be much time left to take photos and videos these days, also with the dog it means Clare cant come up and video on the rostrum? I am working on a solution to bring you more media from future races though!

First round I finished 5th overall, too many little errors and racing other cars on track of a similar pace causing a lot of time wasted, the truck felt OK just too many errors. Second round I finished 4th going a little quicker but again too many nerves related errors. 3rd round I got another 4th place behind Luke Eyre after more on track battling. A change of tyres in the last round of quali dropped me back to a 5th place finish.

Overall the qualifying was decent, the difference here was that everyone was so damn close on pace, all day the top 5 or 6 drivers were split by just 3 or 4 seconds which is pretty rare for Short Course, a mixture of hangover induced nerves and driving errors lost me crucial time on the day. Going in to the finals I was 6th Overall. Karlos was 8th Overall and Eddy had a storming 2nd round in qualifying with a 2nd overall in the round but with a few dodgy runs after sat beside me on grid in 7th place, it was a strong effort with 3 of 4 team drivers in the A Final.

Leg 1 – I accidentally nudged the throttle and crept forward a foot so I had to delay my start on the buzzer so as to not gain any advantage which left me getting mugged big time on the drag race to the first corner, a series of hacks/chops and grip rolls I ended up last by half way through the 1st lap. By the end I finished up back where I started in 6th place.

Leg 2 – Started well and made up a couple of places in the first few corners, got nailed by other drivers and ended up last again after not being seen turtling by the marshalls, so I had it all to do again……… I got on with it and fought back to where I started again. The front runners making no mistakes which meant I just could not get on the back of them after the poor starts in the first 2 legs.

Leg 3 – It was shit or bust time, after 2 unlucky rounds I was sure lady luck was gonna give me a break this time, I had a good reaction time on the buzzer and made 3 places in the first couple of corners whilst capitalising on the others having some poor 1st lap luck, I managed to get on the back of the battle for first with Jamie Hall and Lewis Williamson trading places and hooning away at the front. I got to within 1.5 sec of them but could not pull them in, the overall pace today was super fast, eventually they tangled and I got my chance to fly by, so I just needed to keep it clean for the next 7laps. I made it to the last but 1 lap in the lead till  I caught an apex curb a bit too hot and was sent into a full on action roll, I landed on my wheels but lost just enough time for Jamie to zip past into the lead !!!! Came home 2nd just over 2 sec behind Jamie with Lewis just 0.9 sec behind me after another last lap wobble! PHEW. A good round but it was too little too late again.

Eddy Again had a stormer in Leg 2 taking the win from Lewis Williamson with Darren Boyle just behind, but not without an almighty ding dong after a track cutting incident. In the end the result stood firm and Eddy took home 3rd place overall, his first A Final Podium in the Nationals and well deserved too in my opinion, he prepared well and drove well all day, Top Team Kirk Driver of the day.

Karlos had a strong day out in the very competitive field with finishing 8th in the A Final and improving all day to get into the 11 laps runs, some unlucky moments and driver errors plagued Karlos as it did me on the day.

Pete got 8th in the B Final, after struggling with tyre choice all day, he showed awesome “A Final” pace at times but again, lady luck is always a factor in this game and today was just not his day. Im Sure there is more to come in the future, we just need to get all the ducks in a row!

A big thanks to all the team for another top weekend away enjoying some toy car racing, thank you to RPRCdistribution and TEKNO RC for their continued support, in case you was not aware team kirk have a big box of parts and spares for the Tekno SCT410 trucks so if you need anything trackside give us a holla