TEAM KIRK Opens the season with 3 trophies and a maximum round score for the Captain!

RD1 at ARC Raceway at a track that is always a firm favorite with the drivers, with steep and undulating terrain with added off camber “flips flops” and DOUBLES it was sure to be stormer!

We traveled down to Essex on Saturday morning arriving at a very very wet and muddy venue, it was so wet we opted to leave our freshly painted and rebuilt race machines in the car………. Practice was a write off so instead we mingled in the rain chatting to all the other drivers who did the same, a few braved it on the the soaking wet and puddle riddled astro track throughout the afternoon. We knew the forecast was dry for race day and that the ARC track had very good drainage and would dry fairly quickly so we never lost anything by not running.

Race day comes and the sun is shining, we get to the track early to setup after solving some logistical issues with getting our gazeebo to the track? We setup and watch a few drivers sliding all over the place so we opted to leave practice till late on in the session; I head out for my first run on Schumacher Silver compound Spiral Tyres, its very wet the but grip from these tyres in the wet is mighty impressive, truck felt decent so I left it as it was in stock trim save a stiffer front spring on the Tekno SCT410.3. I only did about 8 mins of practice and left it at that.

I sent Lewis out for a couple of sighting laps to get accustomed the size of the place, an impressive feature in young kids is nothing seems out of the ordinary to them so when I asked him ” can you see the car OK over the back” I am met with a simple “yeah its fine” like this enormous track is commonplace and not even a slight issue HA HA. Gotta love em.

Running 2 cars is interesting, I found myself less concerned with how my truck felt on the track and was more focused on making sure they were rid of sand and freshly charged lipos were available between runs on the track, between that and Marshall both after my race and keeping an eye on Lewis and doing referee duties the day absolutely flew by in an instant. This could well have been a mental advantage as my driving appeared to have improved no end???

It was great to be back racing in this series again, the track was awesome the people are great and laughs were plentiful. We had the usual dramas, drivers breaking things and needing some help to fault find and get back running again, people lending/borrowing/swapping parts and tools to keep everyone on track. Just a small selection of these were Eddy’s ESC failing on Saturday, suspected water damage, I suggested looking at the solder joints as it was turning on but getting very hot very quick, a re solder of the connections and all was good again, we had Big Trev Hambley with a serious Cogging issue on his Castle SCT pro setup which we found was also a dodgy solder joint so we fixed that too. Then after that our generator conked out!!!! If it wasn’t for Graham Hall pitting next to us with his trusty Honda unit for us to plug into then charging lipos all day would have been impossible!!! Stuntman failed to finish the first 3 qualifying rounds with an ESC that kept hitting thermal shutdown thanks to a failed fan? That’s what I love about this series, its not so much about the racing its about the people and the friendships we have all made 🙂 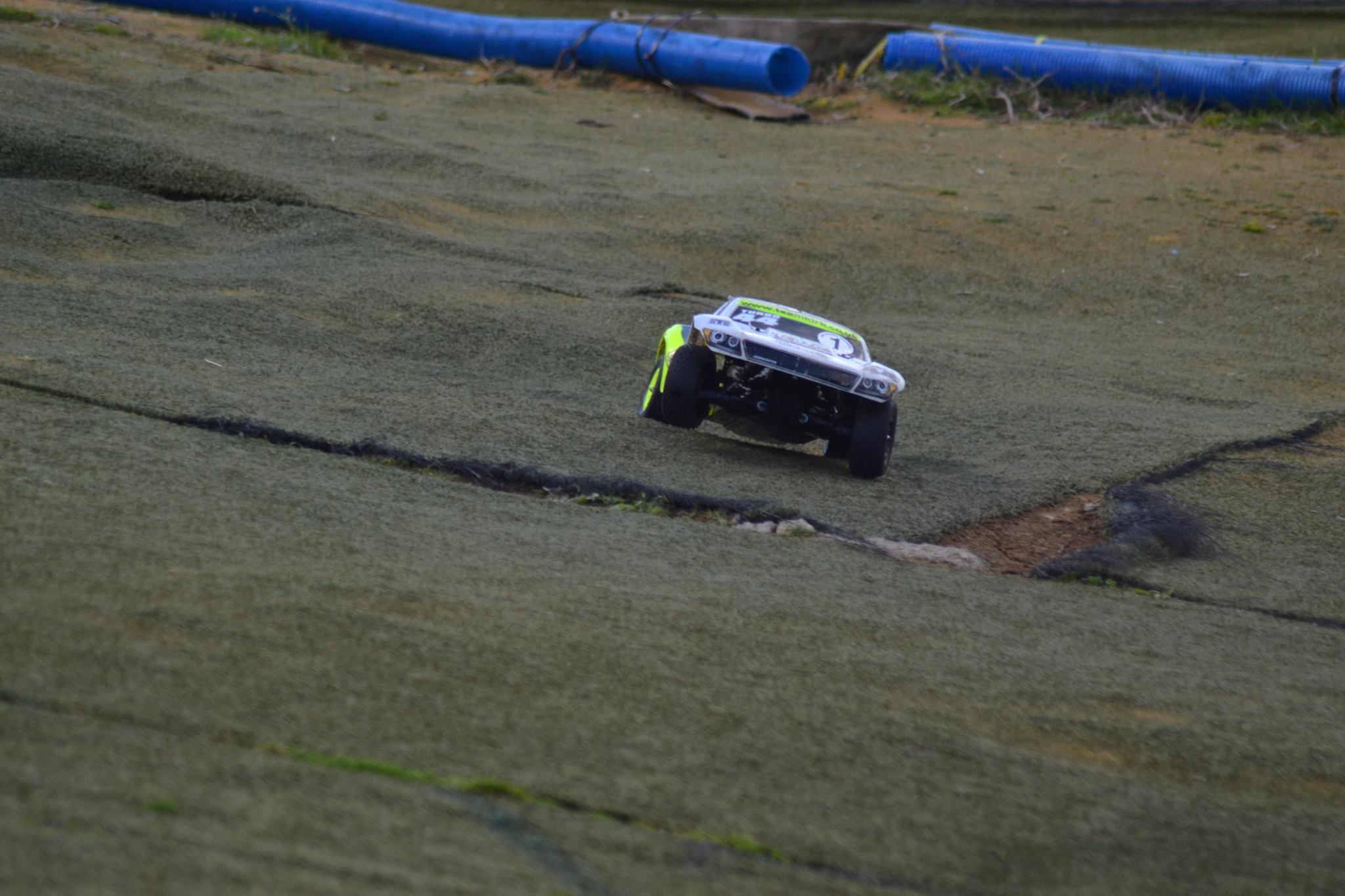 SO ONTO THE RACING!

Qualifying for me went far better than I had ever expected, first round on the spiral tyres was great, started off on a clear track, got my head down and tried to not make any silly mistakes, the track was still wet at the start but by the end of the first 4 mins I was grip rolling on the top corners that were in the sun. I managed to take the win with an 8 lap round with a considerable lead. Trevor Bone making great progress coming 3rd ahead of the fellow Leverton Crew regulars Gary and Lewis Williamson !

I changed tyres for the 2nd round and went the wrong way and had waaaay more grip than I needed, it was twitchy and grabby every apart from 2 lower sections where it was still wet which were pretty much flat out, lots of mistakes compounded by the wrong tyre choice saw me drop places and not recover, finishing lower down in 5th place after losing time with many grip roll incidents.

Rd 3 I changed the front tyres once more and this found the happy medium grip wise, I was able to push and be confident with the car, a poor 1st couple of laps with a mistake right where the marshal was sleeping cost me more than 4 sec, In the end I managed to catch the leaders and do a stunning overtake on the 1st place Luke Eyre, came up behind through the left hander before the double jumps, nailed it and went right over the top. However it was not enough and I never made up all the time I lost initially coming across line 2nd on time behind Luke who was super consistent!

RD4 was awesome, clean get away, 1 very small mistake in the whole round, taking the win with a 8 laps in 315.14 with a 6 sec lead over Jamie Hall who suddenly appeared back at the top of the time sheets!

A new starting format this season sees the trucks lining up side by side in pairs with 3m spacing, so I had the reigning 4wd Champion right next to me on the start line, the buzzer goes I nail it off the line with the Tekin RX8 and 4300Pr04HD doing the business getting me to the holeshot, held a clean line mistake free through the first few corners and already I had pulled a gap. I did my best to control the nerves and settle into making consistent laps, I have no idea what went on behind me but I finished in 1st place!!!!!! I could not believe it, at this point I started to believe that I could take the win here, so going in the leg 2 of the finals I just need to get off the line fast make some space and NOT CRASH……….. Easier said than done trust me.

So leg 2 and the buzzer goes, again I blasted off the line and somehow got the holeshot again, kept it clean and tight to the pipe for the first few corners then opened the taps, all was going well till the last 3 laps when after a couple of small wobbles against the pipes at the back of the track Jamie Hall was on my tail and applying pressure by the barrow full, I start bricking it and just do my best not mess up or go wide and create an opportunity for him to pass, I hold on till the last lap and I hear Mark Everitt over the tannoy announce 20 secs to go and we had just passed the line so I knew this was the last lap, I just went for it, shit of bust at this point. I had to back off the pace a bit to ensure I never gifted Jamie the win with a mistake, I managed to hold a tight defensive line in the corners and came over the line just 1.21sec in front; it was just enough to take it though……… Massive shout out to young Jamie Hall though, at just 13yrs old he showed he has the raw pace to win and the maturity to drive a clean race, he never once bolted for a non existent gap or nailed the rear end on the brakes, he just applied the pressure waiting to capitalize on a mistake, but today must have been my day 🙂

Eddy Rowland Takes B Final honours opening his first round with a 1st B Final trophy to take home, a day of mixed fortunes for Eddy and Pete the Stuntman, both having issues to contend with over the weekend, Pete had a weekend to forget with a string of DNF’s in qualifying followed by some unlucky finals, today was not his day but with running a new truck for the first time it never easy (especially at ARC) and it does take a while for the truck to bed in and for the driver to get comfortable with it so we can fix this going forward.

Karlos Bradish, swoops into the A Final for the first round, starting exactly as he plans to go on. A strong finish today from Karlos, and his highlight was most likely on the only clean run of the day in round 3 where he finished 3rd fastest overall !

7yr Old Lewis Kirk takes D final 2nd place trophy, with only 4 club nights under his belt at a small indoor venue I thought this would be daunting, but nope these kids just crack on with it. Best highlight was improving to a 6lap round on this enormous track and taking home his very first trophy. His rate if improvement has been very good and we look forward to more practice at Telford. Looking at the results he didnt miss the 2wd C final by much, then in the finals was setting times that would have placed him higher up in the C final………… The Young Cadet had a blast and even had some tears when he got beat (we all know that feeling), you see it even teaches important life lessons !

A big thank you to our sponors RPRC/RacePaceRC for all Tekno Spares and kits and Schumacher for the tyres! #TEAMTEKNO we even made into the the Official Tekno Blog Team Report this week too !