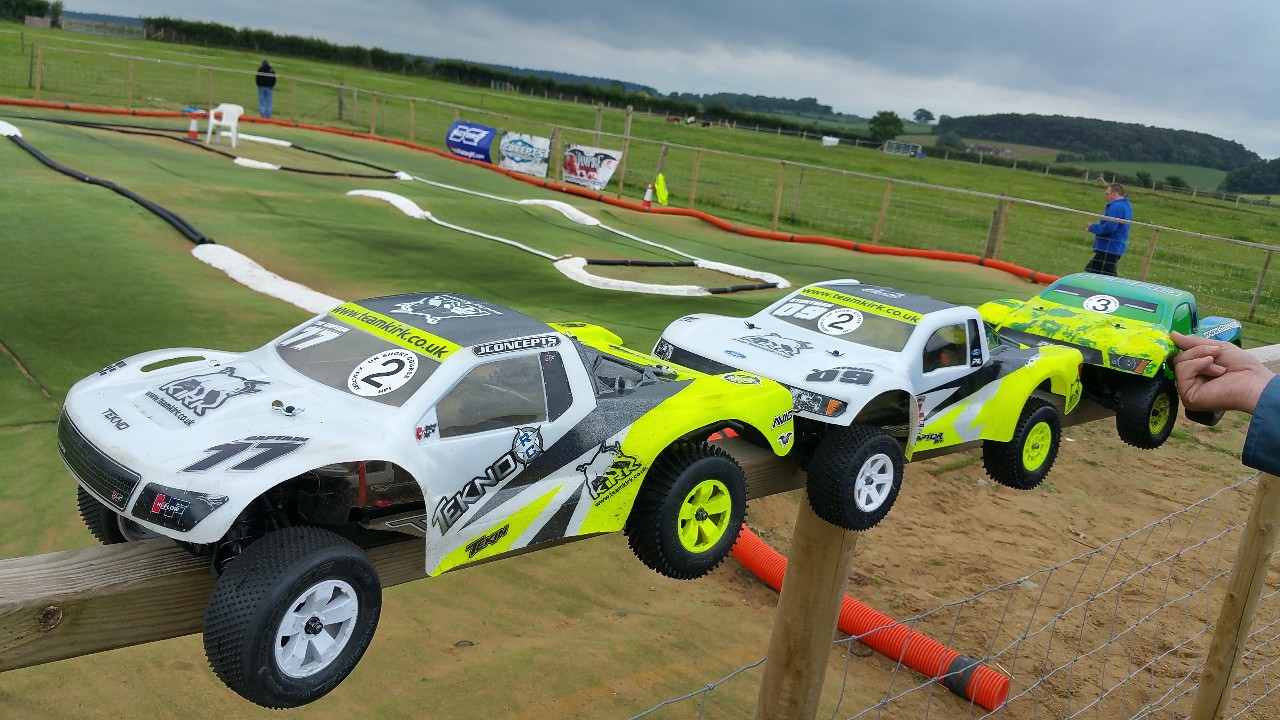 RD3 Takes us to Telford in Shropshire, a challenging little track that has an awesome flow to it, very high grip and battling to get rid of it from the car would the theme this weekend; lessons learned this weekend: Learn to drive more to the conditions and be less conservative when choosing tyres. My preferred driving style is 100% Maximum Attack but sometimes the car or the conditions or even both can prevent me doing this; my focus going forward will be on learning to drive a car that will only allow me to go at 60%/80% Maximum Attack without chucking it on its roof at every turn.

Due to working on Saturday we did not arrive at the track until gone 7pm, so we set about getting the caravan pitched and the awning up as quick as poss so we could hit the track for a short recce of the layout and check out the grip levels etc. I took a few different sets of tyres over to the rostrum so I could do some quick changes and test out a few different combinations ahead of Sunday. I had already done a little YouTube reconnaissance and made a rough setup based on the that, so I had already changed the diff oils and ride height.

The track was very high grip and after trying a couple of sets of tuned Schumacher Mini Pins, the best of the bunch were the Yellow compound on the front with 3 outer rows and 2 inner rows of pins trimmed off, on the rear it was a fresh set of blue mini pins.  I only ran 2 packs on the car in practice as I wanted to try a different strategy this weekend and not over practice, I literally did just enough to learn the layout. 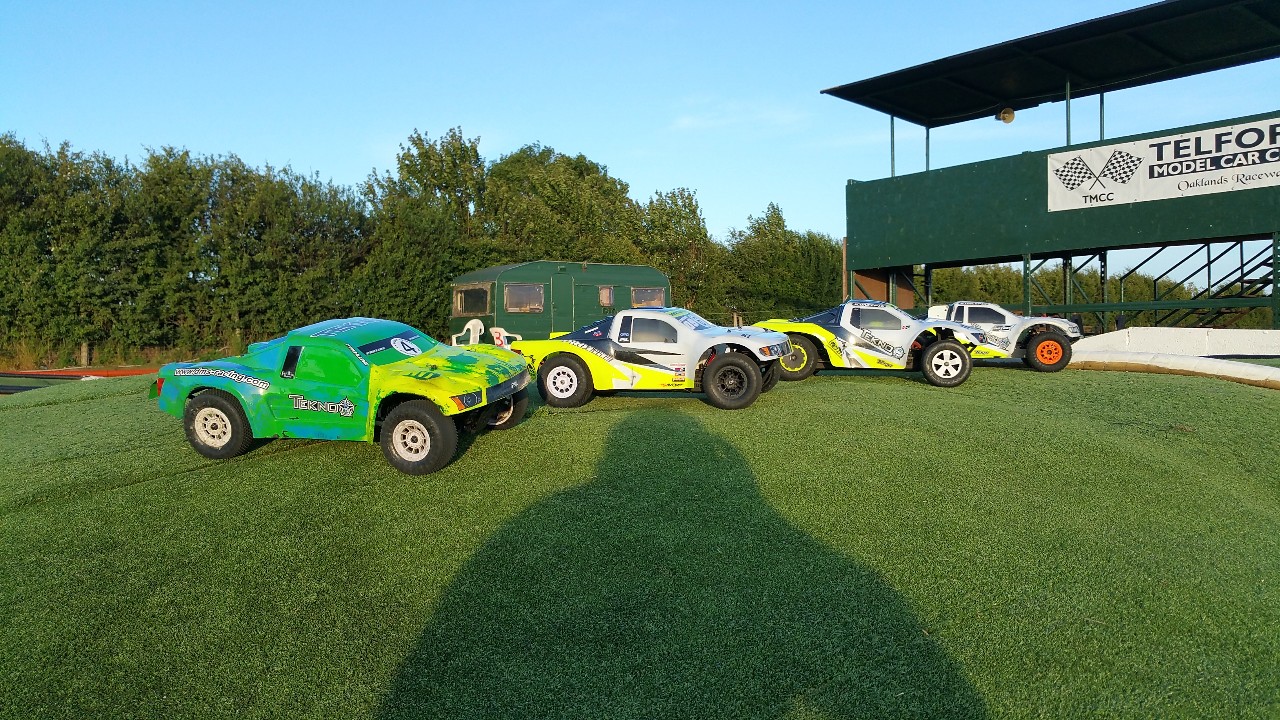 We woke early to hear the rain absolutely battering the roof of the caravan, the rain carried on till around 9:30 ish and then eased off a bit with a slight drizzle, I opted to go full wet spec in the first round so soft springs and Schumacher Spirals in silver compound, amazingly the grip was still very very good even after the rain. I did struggle a little with traction on the fresh spirals, the car felt good otherwise just real edgy to drive. I finished up 5th on 12 laps, 1 lap down due to a number of costly driving errors.

RD 2 – The rain had not re appeared since it stopped at about 10:30am ish so I opted to swap the fronts for a pair of trimmed pin points as these are generally less aggressive on the side bite compared to the Mini Pins, it went OK but I was still gripping up too much and was trying to push the car too fast and ultimately slowing down with all the little excursions onto my roof. I could not believe how much grip there was as the track was still physically wet, on the line it was proper high bite but off the line it was like ice, so consistent lines was what was required but I was just pushing too hard. I finished up 6th in round on 12 laps.

RD3 – Based on the last round and the fact it was drying out further, I change the fronts to some trimmed Schumacher Mini Pin in Blue compound with a fresh set of blue mini pins on the rear. I just could not get over the amount of grip here, I was changing to tyres I know make less grip but it would appear I made the wrong call again as it was still too edgy and had way to much grip and hence the grip roll ensued. I finished the round in 6th place on 12 laps.

RD4 – Time to wheel out the big guns; I swapped to the full dry setup as the track was now dry to the touch, worn and trimmed yellow mini pins upfront and the same blue spikes from the round before; the car felt much much better, I was able to drive at about 80% of maximum attack and the lap times tumbled, I used this round as a test to see where the limits of the grip were ahead of the finals so that I could make adjustments to allow me to drive at a rate closer to 100% Maximum attack. I finally made 13 laps and came home 4th in round which meant I qualified 6th for the A Finals.

Starting in 6th place I knew it was going to be a challenge and was planning to keep it clean and try and capitalise on others mistakes to try and gain some of the missed points from qualifying.

Leg 1 – I nailed it off the line, eyes on the first corner and totally missed the fact that Mark Everitt had not got away from his grid spot, I got lucky as a car in front hit him first and I managed to sort off sneak my way under carnage and get round the first corner without too much trouble. I made some good progress in the first few laps and was running 3rd, after seeing Lewis Williamson and the other front runners make some mistakes I focussed on keeping it rubber side down and somehow managed to hang in there to take the win with a 10.44s lead doing 13 laps in 308.27s which becomes very important by the last final.

Leg 2 – I made some setup changes for this round, so I dropped the rear ride height and swapped to a stiffer spring to try and curb the body roll a bit, I got a decent start avoiding any carnage, made good progress again, but trying to push too hard to try and catch the leaders, not knowing the limits of the modified setup I caught one of the concrete curbs a bit too hard and flipped chassis side up in an awkward spot losing time, then on the next lap I hit the kicker jump just after the first corner way too fast and just did not make the corner and ended up chassis side up again but this time not even on the track, I managed to leave the track entirely over the bank of turn 2. I managed to salvage 4th place.

Leg 3 – I dropped the ride height again just a bit and decided that 95% Maximum Attack should keep me in contention as long as I dont make any mistakes. Another decent start I just kept it as clean and consistent as possible and just hoping for the others to make some mistakes to gain some positions. I had some absolutely epic battles on the track with both Luke Eyre (Durango) and Mark Everitt (8th buggy to SC conversion). Luke and I were literally side by side for more than half a lap without so much as a lexan rub between us. Eventually I gained the position with a mega move up the inside going into the 90° right hander at the back of the track. The adrenaline rush was just immense, I was shaking like a leaf,  I made one mistake which saw Luke and Mark pass me again with about 2 laps to run. The pair of them then had a coming together I just sailed around the carnage to take 2nd place with 15s to go so I just backed off to make sure I just made the lap without crashing, on the last corner Luke was dangerously close and he went for a last corner lunge but luckily I just was just about far enough in front to cross the line in 2nd.

I had no idea where I had finished and I thought Lewis Williamson took it with 2 wins, but it transpired that we had actually tied on the points, so it went down to the finishing times of each of our winning runs, Lewis did 11 laps in 313.62 and I did 11 laps in 308.27s so by virtue of the quicker time I took the WIN in the A FINALS!!! A first time ever for winning an A final leg and a first Round win in the National series, I just could not believe my luck!!!!!!! What an amazing feeling to finally do it; it just shows that its all about consistency and tyre choice.

Next round is Boughton Raceway 12th July – See www.ukshortcourse.com for more information.

An Awesome little track, I thoroughly enjoyed smashing round here once I got the car set up for Maximum Attack! Winning was made that bit sweeter after coming from 6th on the Grid in each of the 3 finals, and better yet I got to introduce my parents and my sister to what us weekend warriors get upto and they had a fantastic day out chilling in the sun and watching some racing; we celebrated the first Team Kirk Victory with a nice BBQ before getting on the beers (again). We stayed over Sunday night and travelled back to HQ on Monday where I discovered that I managed to get round with a broken bottom cap on one of the front shocks which was completely empty of oil!! 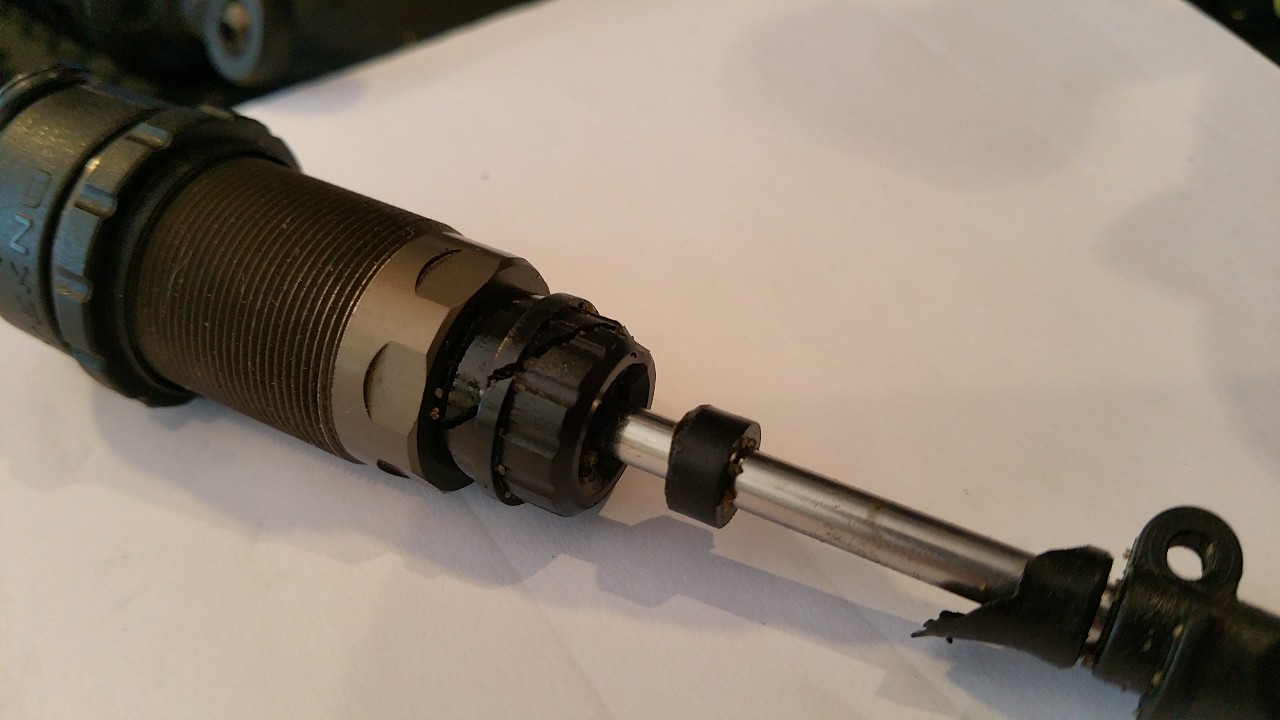