June 6th and 7th saw RD 2 of the UK Short Course Nationals head off to the massive outdoor track at NDOR near Nottingham, I have never been to this track so I went with an open mind and the first impressions were very good. The track was well marked out with some good jumps and technical sections.

The team of people who run the track at NDOR were fantastic hosts this weekends, nothing was too much trouble, great facilities and electric hook up for the Team Kirk HQ for the weekend too. A big thank you to Mandy, Tim and the whole team, there was also a minute silence as a mark of respect to the late Jimmy “OOPLE” Storey which even though I never met the man was a fitting tribute to a very well known and somewhat influential character within the RC racing scene.

This was my 2nd time out with the new Sanwa M12 radio and its like a night and day difference to the DX4s it just replaced, I had a go with Petes truck with his DX4s and it felt like internet gaming with ton of lag, highly recommend this transmitter if your looking to go to the next level from the mid range kit.

Plenty of practice on the track on Saturday in the fierce wind, I went through every single possibly combination of tyre in the box to find something that had the right balance of acceleration, braking and turning for the track. In the end I settled with Pin Points on the front and Schumacher Mini Pins (blue) on the back, it had a nice amount of front grip and steering without too much push, and the rear end was still hanging on and not sliding all over the place. – Many beers followed.

Lewis had a few laps round with his HPI Blitz and was loving it, slowly getting the idea that the car will go straight on its own and he does not have to constantly steer left right, left right. After a few more sessions he will be ready to enter race properly 🙂 Watch this space (you can see him flying under the tunnel in the video below)

It started pretty well, the car felt largely the same as it did in practice on Saturday, I finished 4th in first heat. The second heat got underway and my driving was a little all over the place, chucking time away with silly mistakes whilst just trying to push too hard and so came 5th.

The weather was dry and breezy with sunny spells and its amazing how much the sun going in and out can affect the grip on the track, starting heat 3 I was all over the place, the grip just vanished and I was sliding all over the place and having a real hard time to keep the car from spinning around on the corner exits so I abandoned the run so as to not damage the truck, I finished 4th in heat thanks to others also pulling the plug mid race.

I changed tyres going into heat 4 to see if I could claw the grip back; I also lowered the rear ride height by 2mm and it did feel a little better, but it was my driving letting me down, I put too much pressure on myself to catch the front runners but in this scenario my lack of experience shows, I was trying to drive the truck the same as I did the day before when the grip was totally different, instead of driving within the limits of the track grip and truck setup. If I had it absolutely could have gone better than it did in qualifying.

Starting each of the 3 Finals in 8th place it was much the same as qualifying really, still stressing over the lack of grip and not knowing how to change the car to accommodate and get more rear grip balance without having to put bald tyres on the front.

Next round is Telford 28th June – See www.ukshortcourse.com for more information.

Short Course racing is a fantastic entry route to RC racing, the friendly atmostphere, the family weekends away, and being closed wheel a bit more forgiving if you have contact with another truck. There is a massive range of age groups and ability present at every meeting which just adds to the enjoyment of this great hobby.

Thanks to Jason Ametrine for some of the photos, great shots! They may even make into the next issue of RRCi magazine if all goes to plan!! More of the days action shots at the link >>>>>> HERE FOR MORE PICS 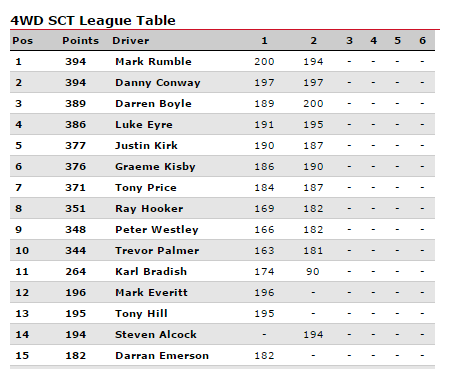