Karlos Smashes the competition to take TQ and the WIN on home turf in the final round of the season!

He only went and bloody done it! Karlos the Destroyer had most definitely had his Weetabix Sunday Morning. He lined up 5th in Q1 and out of nowhere just simply nailed the lot of us; Team Captain and not one but TWO UKSCN champions utterly chopped in one foul swoop of the good sword we shall call the TEKNO SCT410.3

Karlos went on take TQ in quali and won the Finals with his RPRC Supplied Tekno SCT410.3 and in doing so made a number of 1st time achievements in Short Course Racing.

Karlos has been putting in some hours this season and this weekend it all paid off, home advantage or not, he drove the best Ive seen all season and thoroughly deserves the win, I think the smile on his face does the talking! 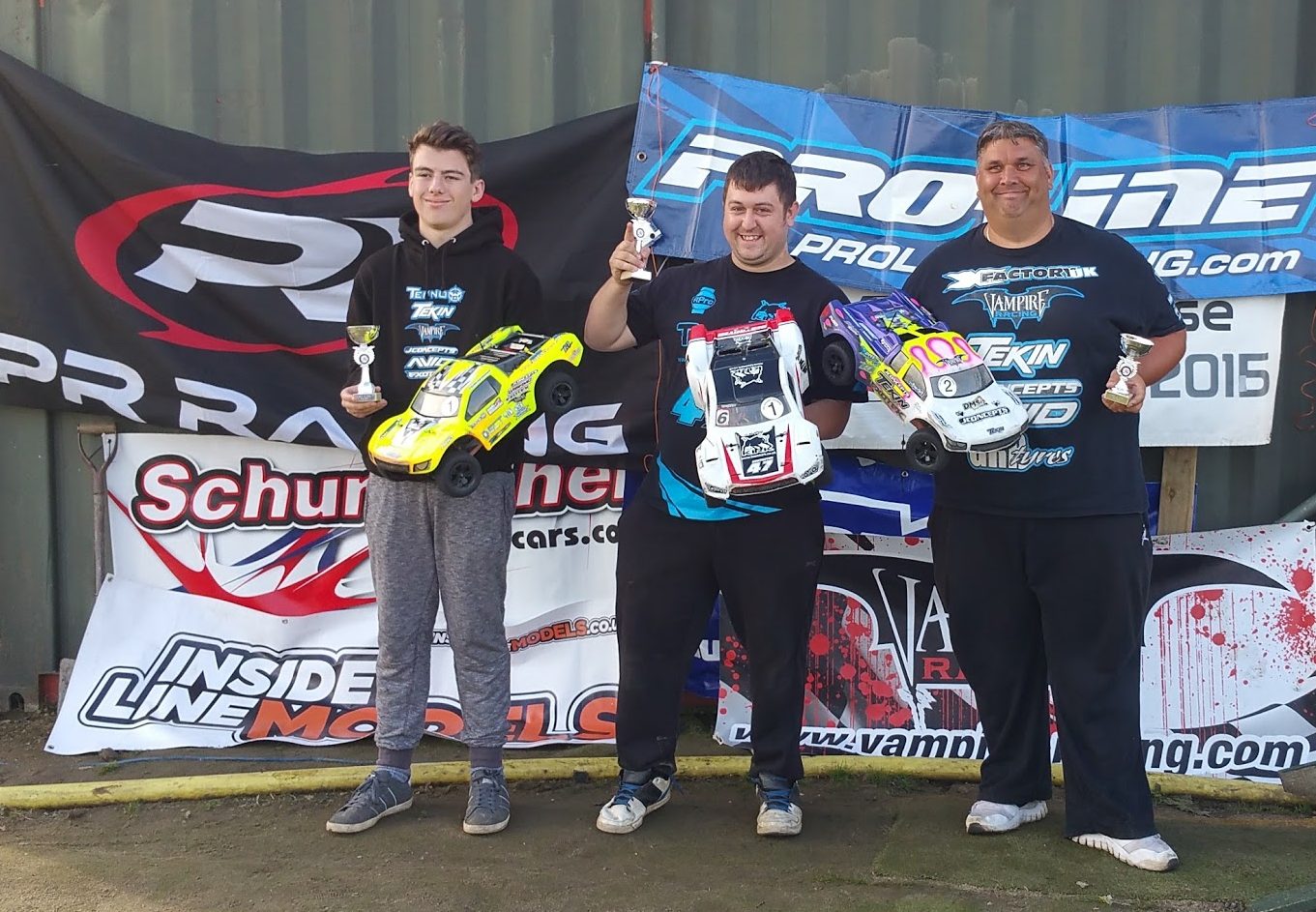 Full Report from the Destroyer himself, stolen from Facebook 🙂

This weekend took us to the final round of the shortcourse nationals at A1 Racing Club.

What a awesome weekend on home turf A1 - Before I go onto my race report I would like to Thank everyone Who pitched in yesterday Sweeping and draining the track after some shocking weather it was much appreciated.

Onto race day with still a wet track this morning It was time to get the full wets out.

Q1 - A Solid and good rhythm going and not jumping on the throttle and found myself catching the top 3 to find I had taken 1st by one second.

Q2 - With the track progressively drying up I didn't want to switch to the drys yet as still some shiny patches on the track and car got a little snatchy towards the end and half the track had dried out the other half wet I still claimed a second only half a second behind first place and pace was feeling solid. I finished up in 2nd half a second behind Darren boyle.

Q3 - Gamble time on the tires with the track constantly evolving it wasn't easy to gauge, I went for a well set of trim new tires to try and eliminate any hope of grip roll and just deal with abit of mild understeer in the dry sections with having a solid start and running out front I had a roll that cost me a little bit of time and was on the charge at the end. Another Solid 2nd and finishing 8 Tenths behind P1 I knew it was in there.

Q4 - I switch from pins to spikes with a little more front end on there we got going and had a roll as I just completed the first lap the rest of the run the car was just simply awesome going like a champ with almost fully dry track you could lay down the law coming out most of the bend drove my own race and pulled out a nice lead to find myself p1 and a good 9 seconds down the road.

So Quali ended 1,2,2,1 and Destroyer Take the TQ well chuffed to be on the front row.

Final one - Away from the line and got away doing decent pace and car feeling no different from the previous round the first 6 laps i was blinding then the next couple of laps the grip roll emerged and lost me 7 seconds and lewis and darren was to far out of reach finished 3rd and setting the top 3 best times so new the pace is there just needed less grip.

Final Two - I switched back to my tires from Q3 onto the pins.
Lights out and away I had no issues with the grip roll and built a nice gap betwen myself darren and JK fighting it out for 2nd and 3rd with the buzzer gone Taken a first.

After Final 2 - There are plenty of variables in this myself,Justin,Darren and lewis all in with a shot of taking the final

I Couldn't be happier to take the win its been an awesome weekend have been on the pace.

Would Like to thanks RPRC for supporting the team through this season of racing.