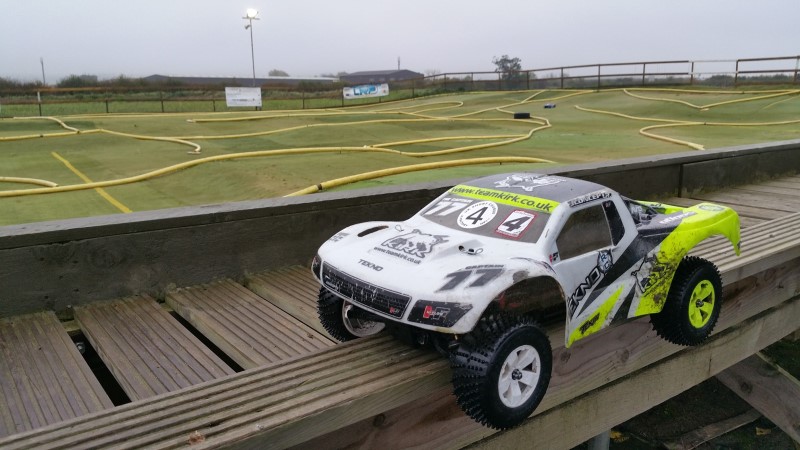 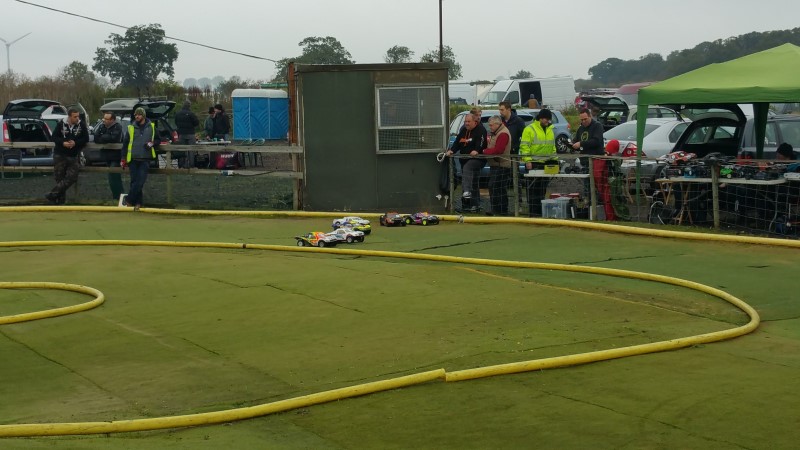 It was a cold and wet Sunday morning in October, getting up in what felt like the middle of the night I got all my gear packed in the car and was off to go before 7am (if you know me you will know this hurts). After a steady drive north up the A1 I arrived at the track adjacent to the Stalkers MX Track at just before 8am and got set up.

The weather forecast was iffy at best with chances of rain all day long, the track was soaking wet first thing, I did a quick practice run on the Schumacher Mini Pin tyres in Silver (super soft) compound and it was just far too wet for those to be remotely useful, understeer in and oversteer out in equal measure. A quick switch to the Silver Compound Schumacher Spiral tyres and we were in business; still a bit slippy and slidey but much more compliant and drive-able.

Karlos was feeling confident and didnt do any practice, being his home track and having set the track up he had every reason to be confident. We were in different heats to so it was hard to gauge each others pace during the qualifying rounds, ultimately Karlos was on it through qualifying and took the win over the 3rds of Qualifying beating me to pole in the finals by just a mere 6 tenths of a second!!!! It was close all morning, I was setting faster laps but having to get the car setup dialed whilst competing for points was not ideal. So Karlos took the full 100pts on offer for the for the first round.

The A1 ICEMAN series is run over 12 rounds over 6 events, and is split by qualifying counting as 1 round and the finals counting as 1 round. With Karlos Taking the win in quali on home turf I had to up my game in the Finals........

Karlos was on pole and I was 2nd place behind him, the club decided to trial a different start procedure to the norm and so we started 45° to the pipe, its fair to say the first attempt did quite go as planned, almost everyone got off to a great start apart from me when I was T boned at Turn 1, the exact thing we were trying to tempt drivers away from doing, so as seems to be fairly normal me I was dead last with a 20/30m deficit by the time I made it to the 3rd corner! I just had to keep my head down and do the best I can. Managing to make my way cleanly through the field I arrived right behind my team mate Karlos in the closing stages of the race, but the wet conditions and the sore luck at the start hampered me getting a win in this one, we both crossed the line just 5 tenths of a second apart!!!!! Very close racing indeed, and I had a blast.

By the 2nd leg the track had dried out significantly and after deciding to go out on Schumacher Mini Pins, the car felt much better in the dry and I was able to drop the hammer and get the pace up a bit, it was a mega close run battle with me and Karlos pressuring each other for the first 5 or so laps until a mistake from Karlos allowed me to make a break for it and get some distance between us. It would appear that Karlos is somewhat of a rain master compared to me, I struggle in the wet, probably more so due to lack of practice but as the day went on I was set to get some more practice in the wet?

Sitting watching the other finals ahead of our own, we could feel the rain falling and after the nice dry track in the 2nd final I was gutted, I had just got the truck feeling good and then it all changes again LOL. Karlos and I were deliberating tyre choices as the 2wd trucks were starting to drift all over the place. In the end we made a team decision to both run the same tyres in the name of making it as equal as possible, so the we bolted on a set of the Silver compound Schumacher Spirals and went for it............................. AND WHAT A RACE IT WAS!!

We were absolutely noes to tail and swapping places lap after lap; both showing some fantastic and clean overtaking moves on each other, I can honestly say it was the best race I have ever had in my time in RC Racing, it made the Nationals seem like a right old mess, this is how it should be done, im just gutted we didnt manage to catch it on video this time? In the end I took the win by cats whisker of a margin with just 0.3 seconds between us as we crossed the line!

Rounding out the ICEMAN series opener Karlos and I take the top spots tied on 199 points each! Roll on the next round 🙂

Put simply the best day of racing to date by far, and the best bacon and egg sandwich I think I have ever had in my life! If you have a short course truck in your collection and you are not making the effort to do this series then trust me when I say you are doing yourself and your truck a MASSIVE disservice 🙂