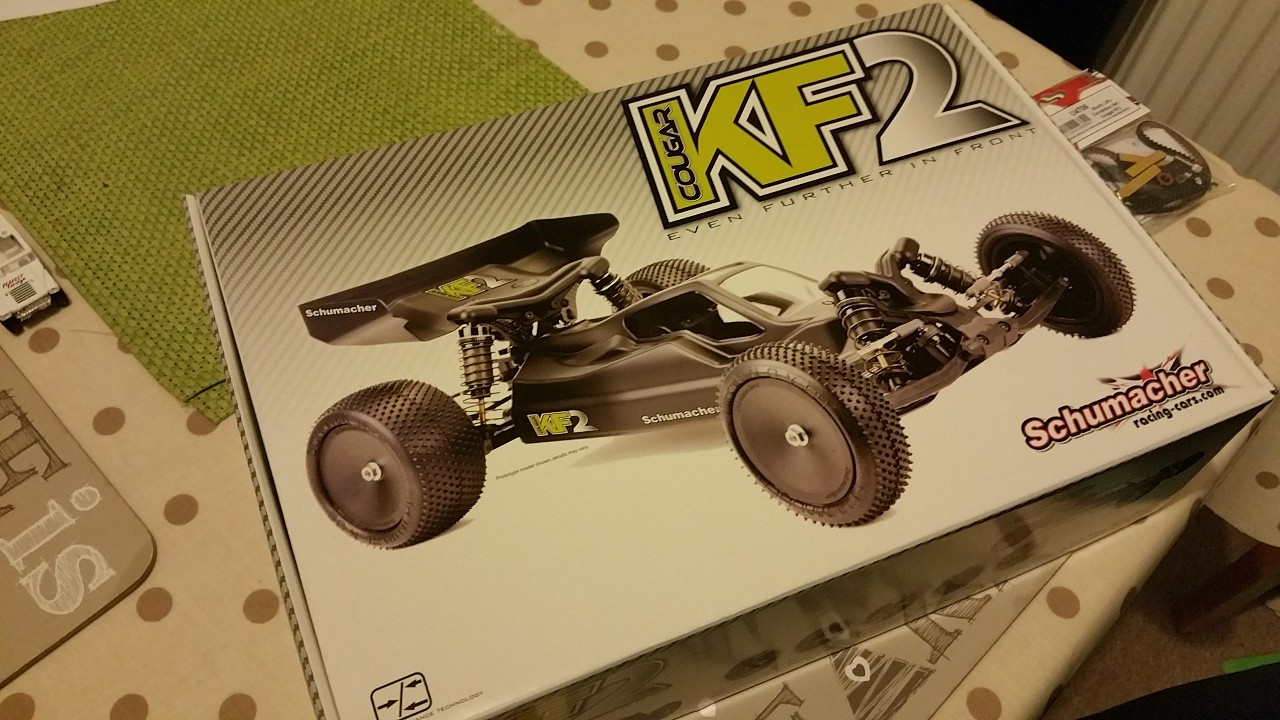 As many of you will know our local club Silverstone made the decision recently to stop running a heat for the short course trucks, this was a massive blow but one which now I had time to think about was not such a surprise. Pete and I (and Simon when he was racing) were the pied pipers of SC racing at our club. When we went others brought their trucks out to play, but with our involvement in the UK SC series taking up a lot of time, working on the trucks on a Monday night after just getting back from a weekend racing to get it ready for the indoor high grip track at the stone was becoming increasingly difficult, that and the fact we were bitten by the Drifting bug over winter we spent less and less time at the club on a Tuesday night.

Over time the numbers died down to being almost non existent, it was at this stage the club decided to make it official and stick exclusively to buggy racing. I was totally gutted that I would not be able to race midweek anymore as I just recently sold the Xfactory buggy to another Silverstone member as I wasnt using it. So with no club to run trucks and no car to use at the stone I needed a solution. 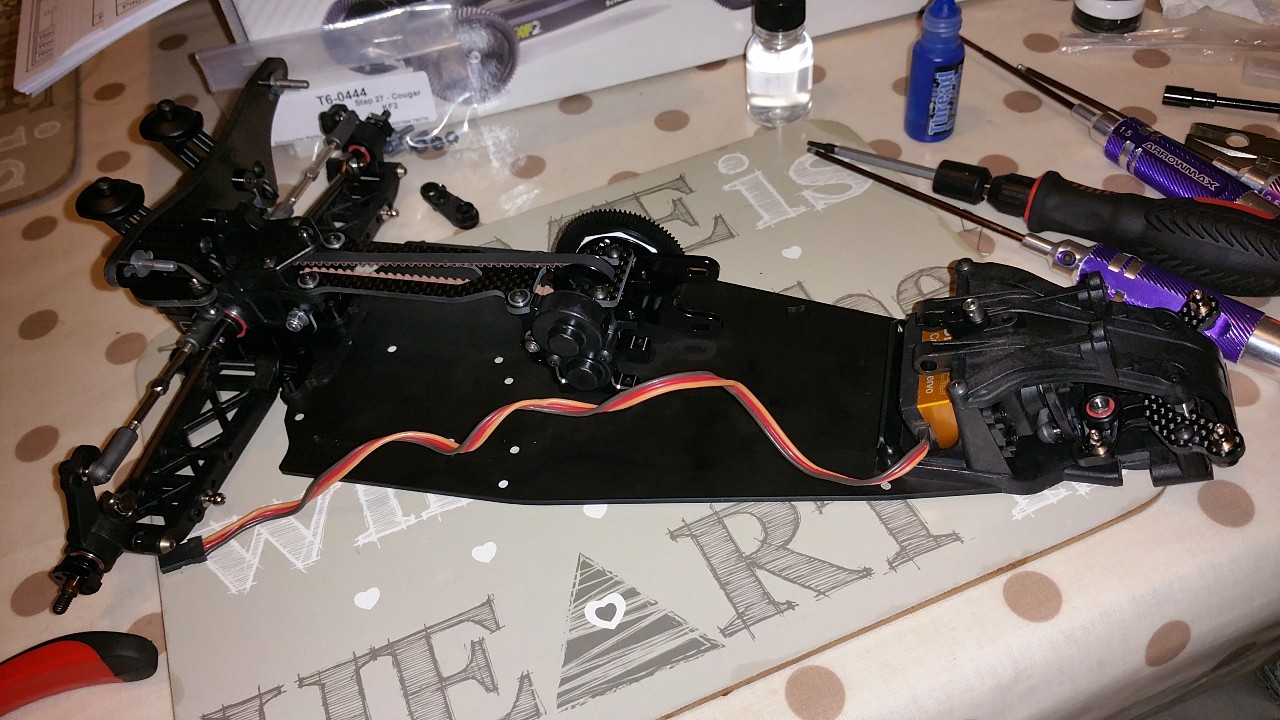 ENTER THE – SCHUMACHER KF2 1/10th 2wd Buggy, and what a piece of kit she is. I had already had 2 buggies (Cougar SV and Xfactory X6S) neither of which I really got on with, I think it has to do with the fact that I started with 4wd so I just always found them a bit odd to drive, I was hoping that starting with a brand new kit this time I would bond with it more and it would be better to drive than the others.

I have to say the kit was a breeze to build once I got my head round the instruction manual as it is a bit different to the way the Americans write a manual, the level of engineering and thought in this kit is brilliant though. The first buggy I have built from a kit, the KF2 aint cheap, however reassuringly it comes with a most of the upgrades that were available for the KF in the box including the low grip kit and its very very good quality materials, there’s a plethora of carbon and anodised aluminium parts and some rather clever and innovative features too, like the reversible toe blocks which hold the rear hingepins. One point of note though, if you intend to run a shorty lipo pack and not saddles, you need the shorty conversion kit and a dremel, the conversion kit comes with the parts like the belt and additional belt pulley tensioner to clear the lipo however you have to cut the plastic side tray down on one side to be able to fit the battery in once its built. I will post about this with pics another day. 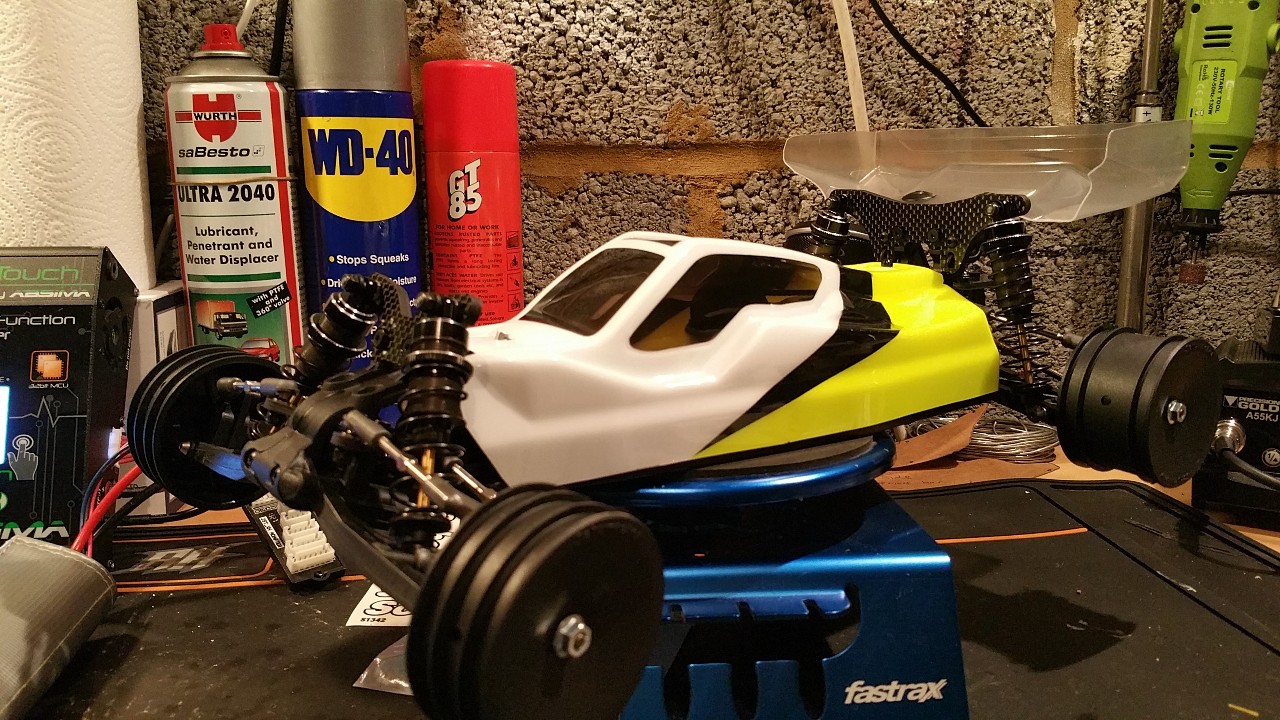 I went with the customary Team Kirk paint scheme, and sticker bombed the shell and we were ready for the first outing. I took it over to Silverstone RCMCC for its maiden run, however it didnt all go to plan, I stripped a servo horn in the first heat so didn’t finish, I then fitted the Core RC alloy servo horn and that fell off during the 2nd heat as the thread loc didn’t have enough time to dry and in haste I probably didn’t tighten it up enough. In the 3rd heat after Ian gave us a hand sorting it, the belt slipped off as it wasn’t tight enough……. This was the only thing that wasn’t very clear in the manual, there were no references to belt tension. In any case I got it all sorted and I had somehow still qualified in the C final.

After I got the teething problems sorted it was a dream to drive, even though the club just changed the surface meaning I was on the wrong tyres LOL It had always been Mini Spike Yellow compound rear and Cut Staggers up front, however the new surface dictates that Mini Pins are the way forward (for now at least, the track gripped up loads over the last weekend for the SC Nats). I loved how the car drove, very sure footed and planted on track, great steering response and even the brakes appeared to work, this was an issue I always had with 2wd cars feeling as though they had ZERO braking, the brakes on anything 4wd are just mega, this is just one of those things I will have to adapt to.

Stay tuned for more once I have had a chance to change the tyres and get some more wheel time with the new car!

A big thanks to Robin and Schumacher Racing cars for the support, I look forward to more racing in 2wd in the future. http://www.racing-cars.com/