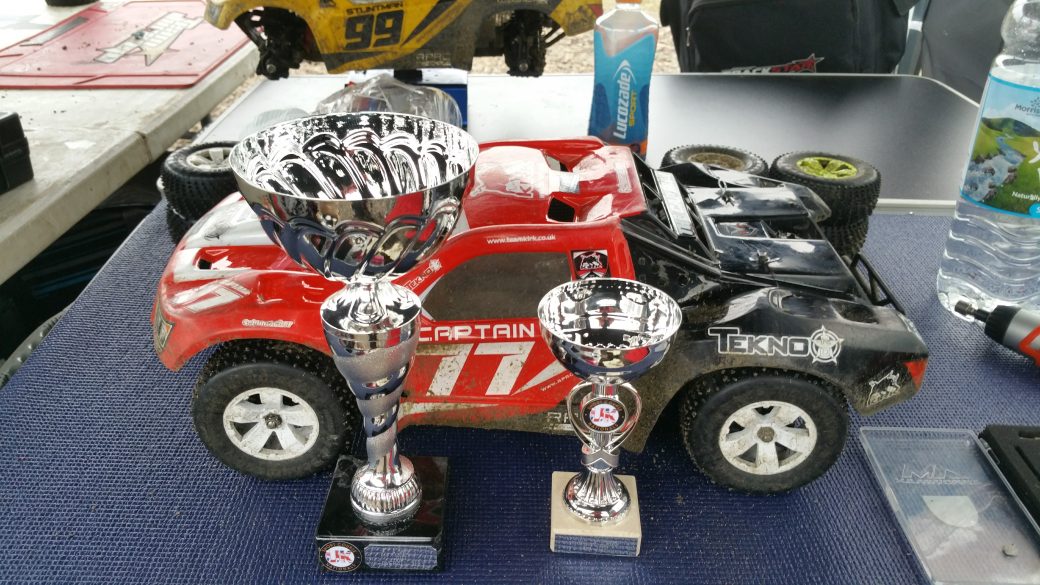 So 2017…..WOW what a year, where do I even start, it had many ups and downs (probably more downs). I will start with a personal update as that may explain a few things then I will run down a summary of the 2017 season.

The 2016 season was great however I started to get waaaaay to serious towards the end and I found myself in a situation where I simply wasn’t enjoying the racing anymore, prepping to get ready felt like a grind, the logistics of getting there and setting up and getting home again all started to just get too much. Then finding time post event to write it all up for the website and facebook etc got more difficult. I had been suffering some ill mental health for a while and the whole thing just started to make me worse.

I very nearly pulled the plug, but the team really helped me get my head back in the game and made me realise that if I stopped putting so much pressure on myself to get results I might just enjoy it a bit more. So with that in mind I decided to stay involved and try to not take it so seriously; so the pre-season prep continued as it always did, new body shell, paint jobs, team wear etc etc. We went racing, socialised, drank beer and ate BBQ food and it was a lot more fun I can tell you. I started to feel better and better as the year went on and the results were as good as I ever had. I stopped smoking, started drinking less, cycled more and lost a load of weight. I had less stress and more time as I pretty well just gave up on the media side of teamkirk for the whole year (hence the lack of updates). I lost my job, we got robbed and all the RC stuff and our bikes were stolen from our home in the middle of the night then to top it all off we were sent an eviction notice so had to move house aswell…… To say personally 2017 was a forgettable year is a massive understatement.

Anyway enough with all that, the end result is we have a new home, I have a new career having started my own Sameday Courier Business (www.kirktransport.uk) and to be honest, mentally I have never felt so good. Initially for 2018 I had planned a year out to focus on the family and do more cycling trips around the country, however I went to the 1st round of the Nationals this weekend gone, and I think I have that bug again??????? So there is a chance I could make a comeback so watch this space. 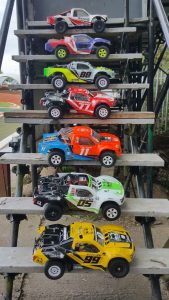 Racing wise 2017 was good for me, multiple podiums and a decent result at the end of it, the others all made solid improvements throughout the year, but the sole focus was just doing some racing and enjoying the whole event without putting too much pressure on things, the net result of that was more consistent results and 100% more enjoyment! WIN/WIN scenario.

The 2017 Calendar consisted of 7 rounds, 2 of which were on dirt and that was an interesting prospect as most had never raced on dirt as it was last featured in the series back in my first season in 2014. This made for a busy year but we travelled to some great venues and great times were had on the social side of things 🙂

This season we changed our team colours to RED with white logos to make sure we can find each other in the paddock, we had some additional drivers join the team with Dave Corah, Darren Wainwright and Trevor Hambley (more on these on the driver page once I get round to finishing the post I started back in February last year…. I had planned a big announcement etc but I properly fell off the wagon, so I apologise for that at least. 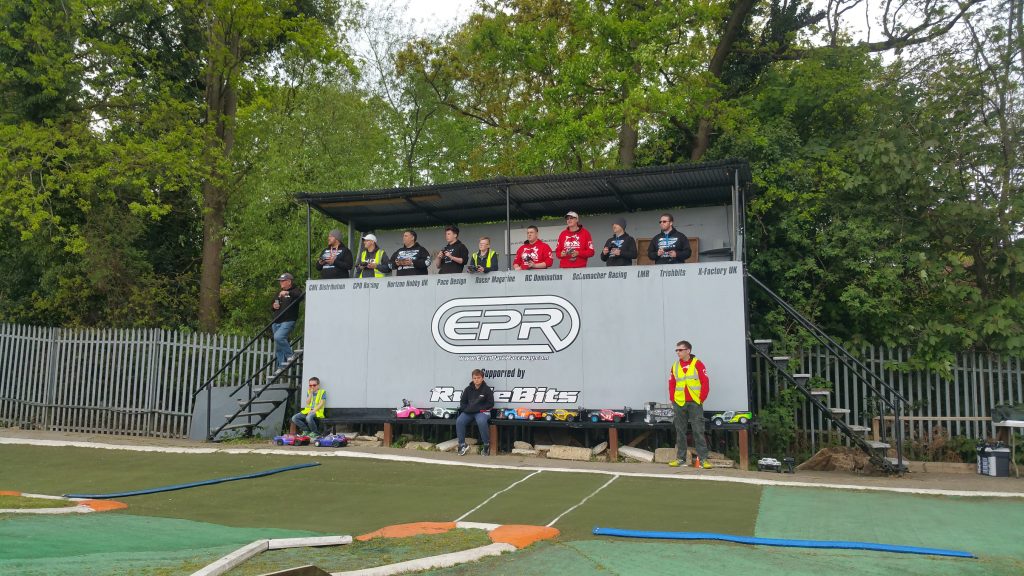 A very cool little venue near Beckenham in Kent, a proper club house and bar and ample camping space, you can probably already guess how this went down……….. No, well let me tell it was easily the most memorable weekend of the year, I sank into the B final because I couldnt see the track, Big Trev got “delivered” into his tent in the wee hours and got the silent treatment all day Sunday, and that’s just the start of it ha ha, I cant even remember where we all finished to be honest and I cannot get the results in their entirety as Spendy changed the format for the results on the series website. There is an image of the season ending results for all to see in the gallery at the bottom so go check that out.

The track is fairly small but the challenge it presents is not, quite a tricky circuit to be fast and consistent on, it has a number of very well thought out features and varying surfaces mean grip is not the same all the way round, it certainly favoured the experienced. I enjoyed driving the track but cant help think less fun on Saturday night would have meant more fun on the Sunday LOL

This is poor and I am Sorry, I cant remember where anyone finished apart from Darren and Trevor both making the B-Final Podium 🙂 I remember the event and I loved the track, so fast and wide you could really hang it out, sadly this venue is not on the calendar for the 2018 Season. All I have is a couple of pics, some of which I nicked from Kev Jones’ posts on the UKSCN facebook page 🙂

A long drive for many and the first dirt round of the season so most of the chatter leading up to the race was tyre related, we got lucky (or not depending on how you see it) to obtain a bargain job lot of dirt tyres in various tread patterns and compounds. Mostly they worked OK, wear rates were quite mental but the surface was pretty abrasive so its to be expected. Personally I love racing on dirt, I’m hooked on just faffing about and drifting it into corners almost backwards and sliding the whole way through. It aint fast but it looks awesome LOL. In the races though I did my best to keep it tidy. Had some great battles with Kev Jones throughout the event. The highlight was most likely on Saturday when I managed to glue a brand new wheel/tyre to my pit table……… gave everyone plenty of laughs that’s for sure. In the end I took 2nd place in the A Final and Karlos pulled a 3rd out the bag!!!!!!! But best of all the sun shone pretty well all weekend. #Winner

An absolute SCORCHER of a weekend, the main memory was the heat! Oh and getting another podium 🙂 We decided really late in the day to go down Saturday as originally was going to “day trip” it on the Sunday only. We got the caravan packed up and went down late afternoon, got a few sighter laps in and then parked it and hit the beer (gently). Raceday came and we just went out and did our best, 3 drivers managed to get on the podium with me in 3rd in the A-Final and Pete/Dave taking 2nd and 3rd respectively in the B-Final. A fantastic result for the team. One to remember for sure. 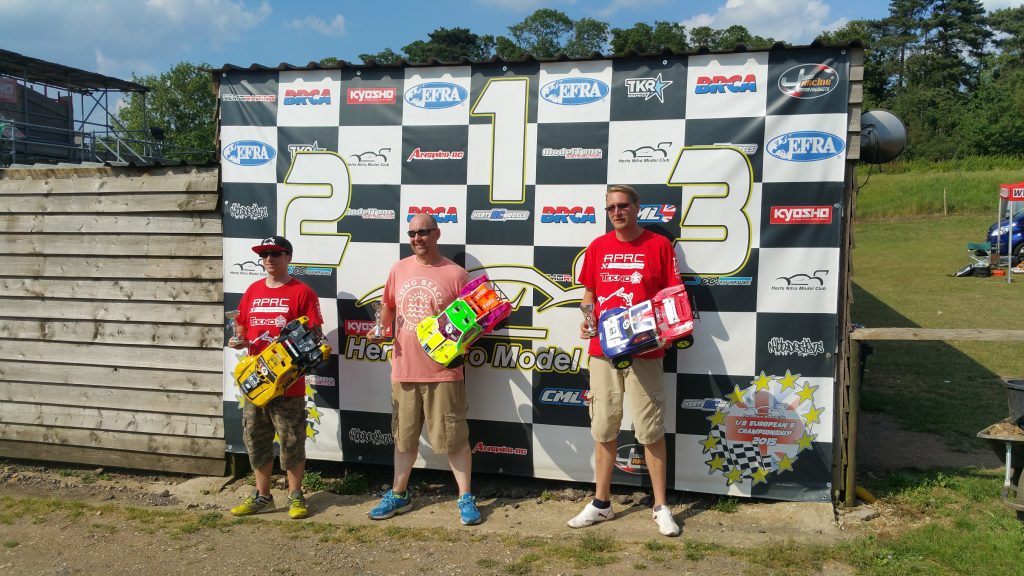 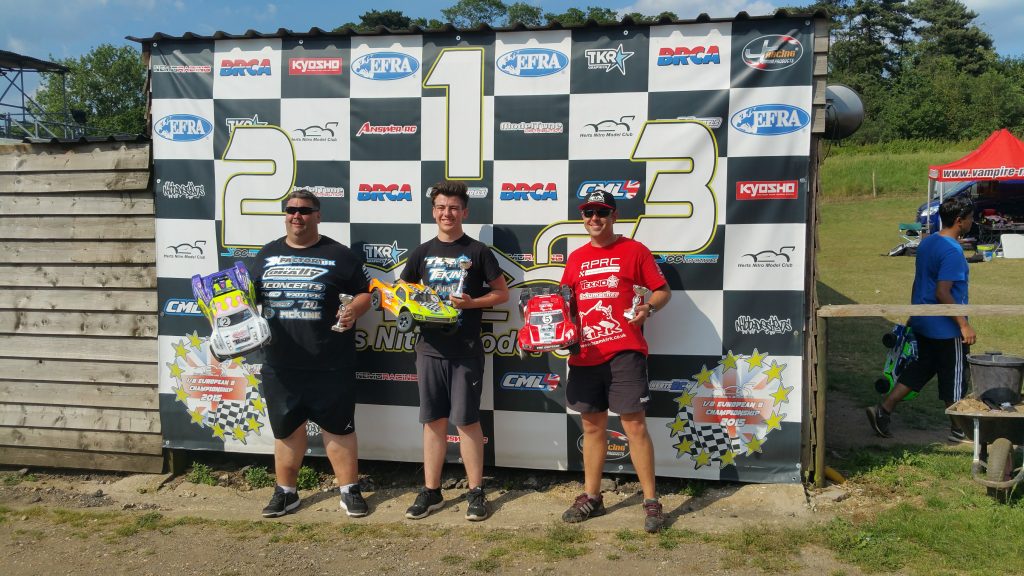 Local track for us and the 2nd dirt round of the season, massive amounts of fun hooning around on the dirt, however it seemed everyone bought their A-Game on the dirt this time round and podium finish for me was out reach, too inconsistent and struggled with the setup, Simon however propper us up with our podium streak by sneaking his way onto the B-Final podium!!! Top Lad 🙂 No idea who finished where but Im guessing I qualified well as came home with 194pts for the round 🙂 Theres a great album on facebook with loads of pics on if you follow this link.

Images below are courtesy of Craig Gibson on facebook, link above goes to the full album. 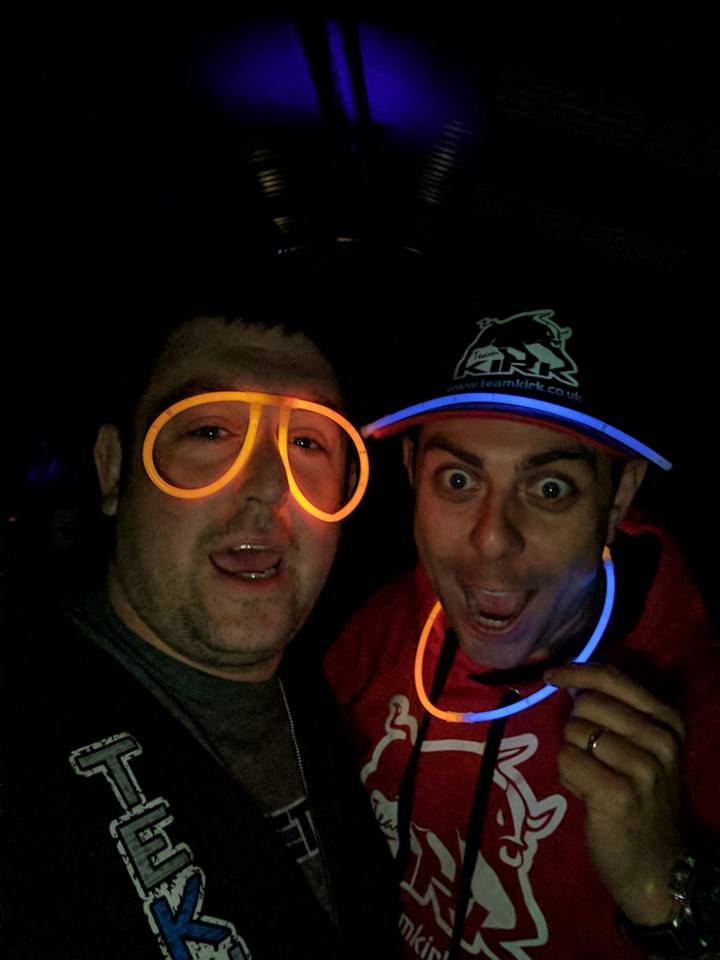 I think this has to be everyone’s favourite event, a 3 day jolly to Robin Hood Raceway. Easily the most fun we had this year, the party on Saturday was epic, some very close and enjoyable racing with great weather to boot. Met another Tekno convert at the event who is now doing a few rounds of the UKSCN too. One of the highlights was Karlos and I both finishing equal 5th in one of the finals finishing on exactly the same time!! #mental

More of the same this year I reckon, even If still don’t have a truck Ill still be there to take in the atmosphere!! 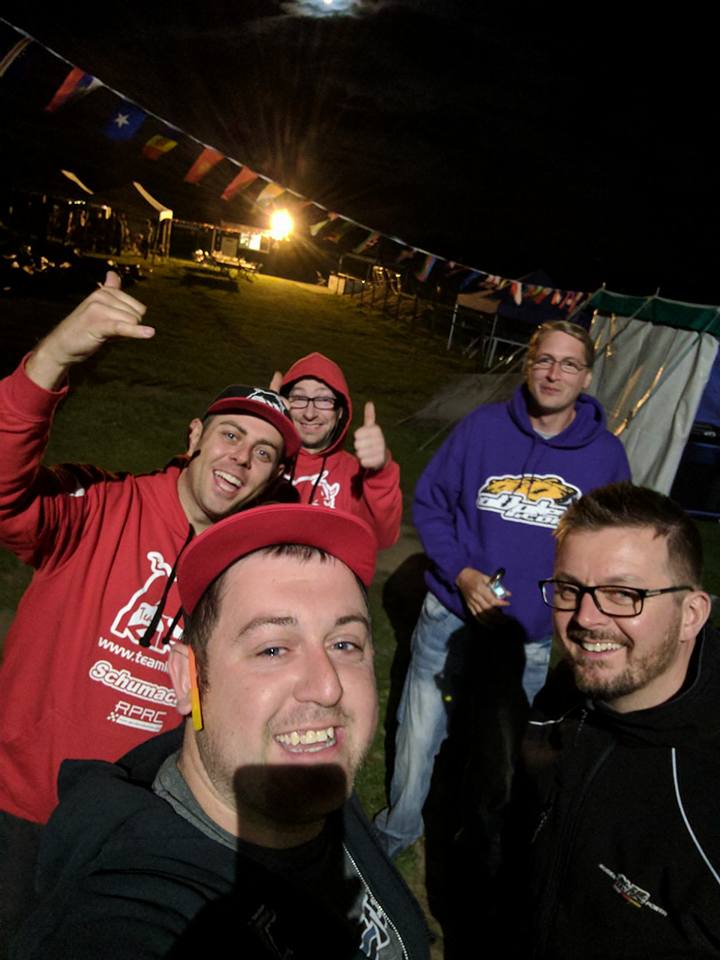 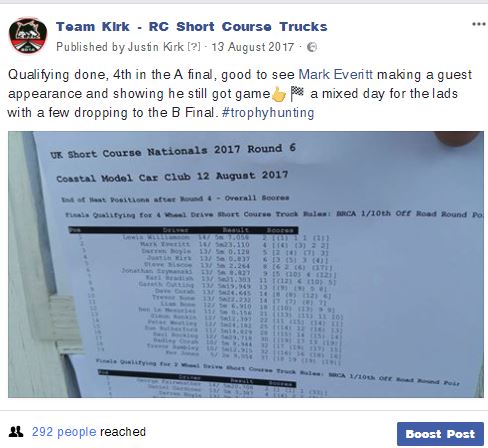 A new venue for 2017 and it was universally accepted by the racers, a cracking little venue in a nice spot with views onto a massive dry ski slope next door, they also have a cool little tarmac circuit here for the TC lovers! Even our old racing buddy Mark Everitt showed up to show us he’s still got it. Good to see him after a while, he and the other Mark (Rumble) both left the SCT scene to focus on 1/8t. A fairly decent run at this event, nothing to write home about. No podiums this round but a well organised event and great weekend away with the racing family. On a plus side, everyone got to meet Bob the Builder !!

It is customary that the final round of the series is held at A1 Racing Club in Grantham, guaranteed to be wet or windy affair (often its both) at the end of the summer, I had only just been made redundant from my job so very nearly never made it here, and boy was I glad I did. The short story is I managed to sneak a couple extra points in from a few solid runs to nick 3rd on the day and also bump up to 3rd overall in the 4wd Championship. A happy bunny and a very cool way to end the season! Another great day had by all. It is all bitter sweet this last round, kind of glad its over which means a rest from the logistics of the racing season, but no so glad that summer is all but over and we dont get see the racing family for many months 🙁

And that was, another year of memories. Sorry this never happened along the way, but in complete truth I simply could not arsed to spend the time it takes to do it all. Below is the final standings for the 2017 season, and an interesting chart published by Darren from the Xfactory team showing who ran what in terms of tech, so if any newbies want to know who’s running what, this is your cheat sheet 🙂 Just bear in mind that is at least 95% driver, the other 5% is setup and hardware. You could stick a world champ at the wheel of any these rigs and they would do seemingly amazing things with them. 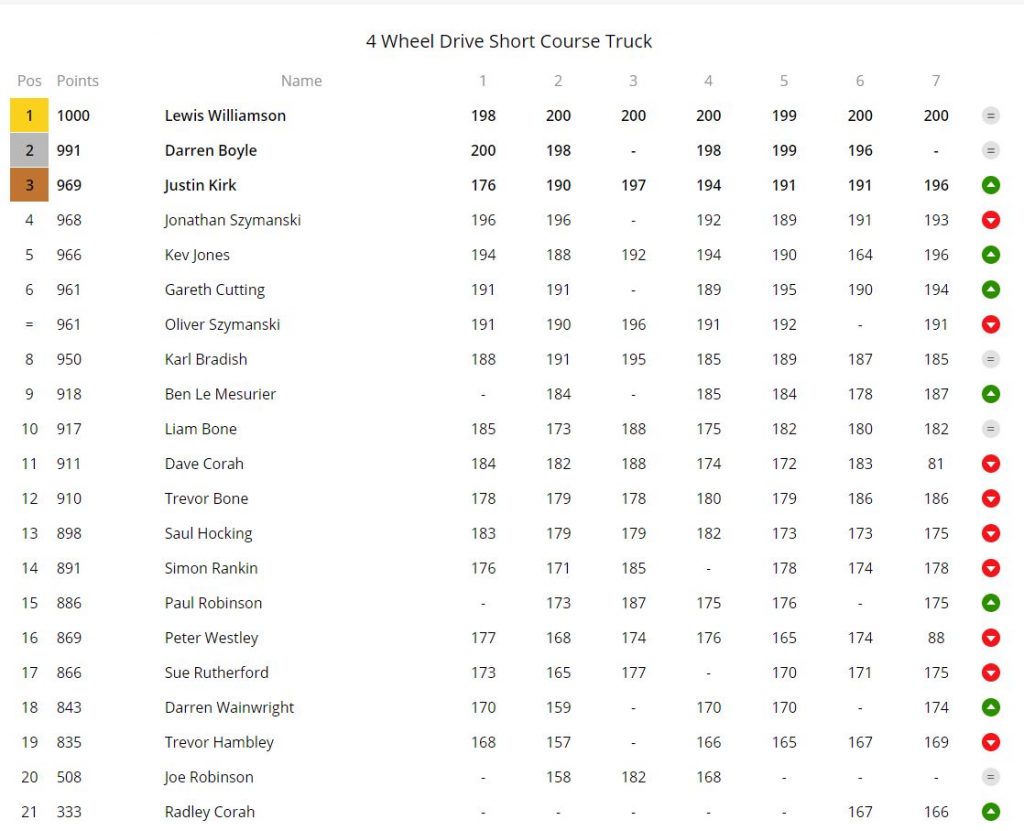 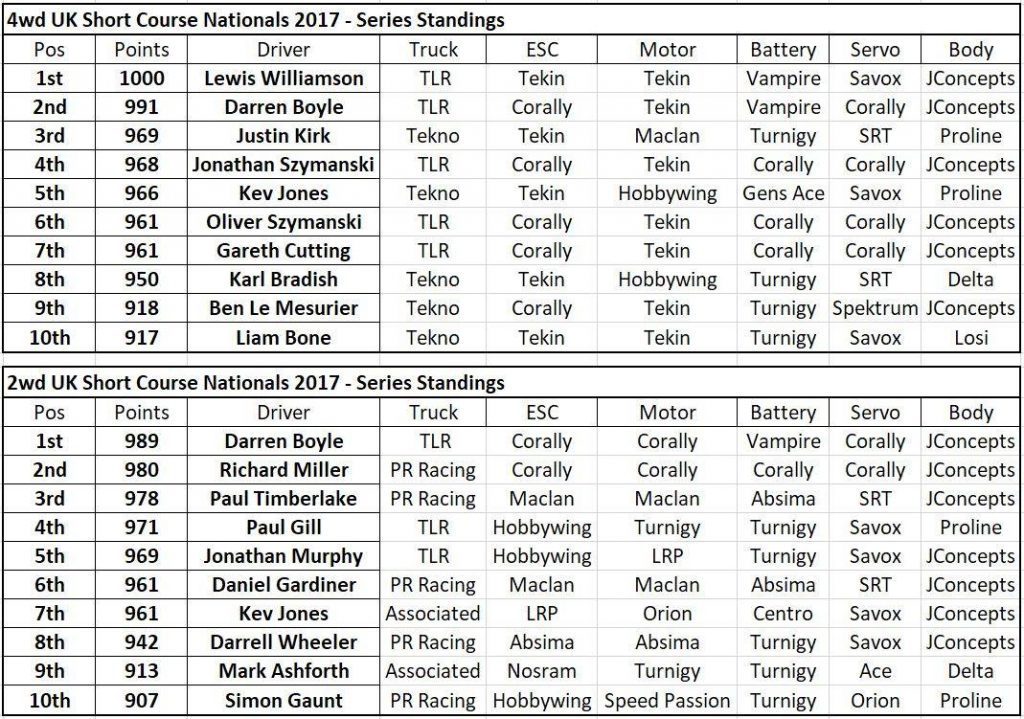 Peace out, I will try and keep upto date for the 2018 Season 🙂 Keep on trucking.