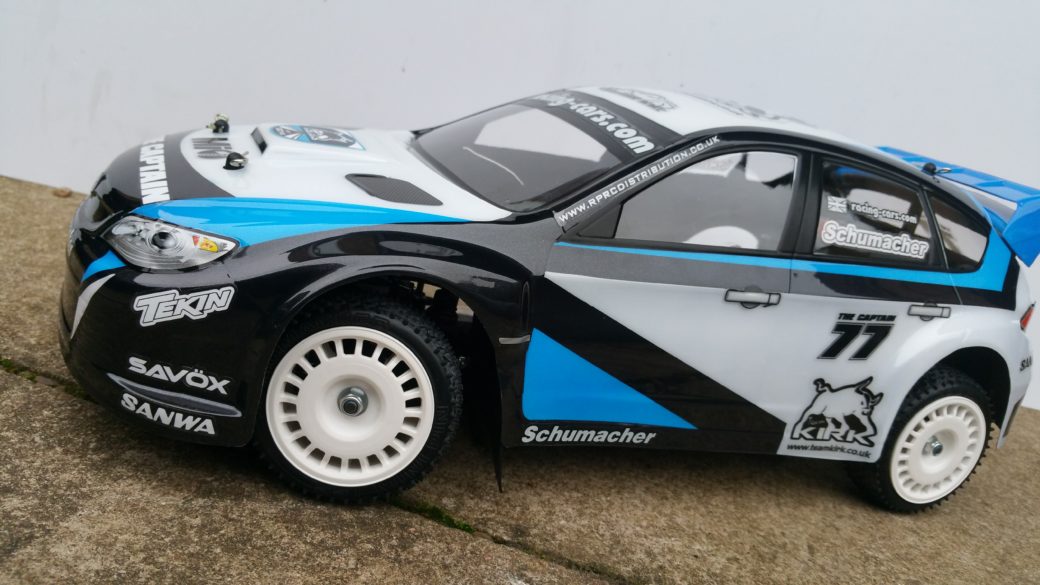 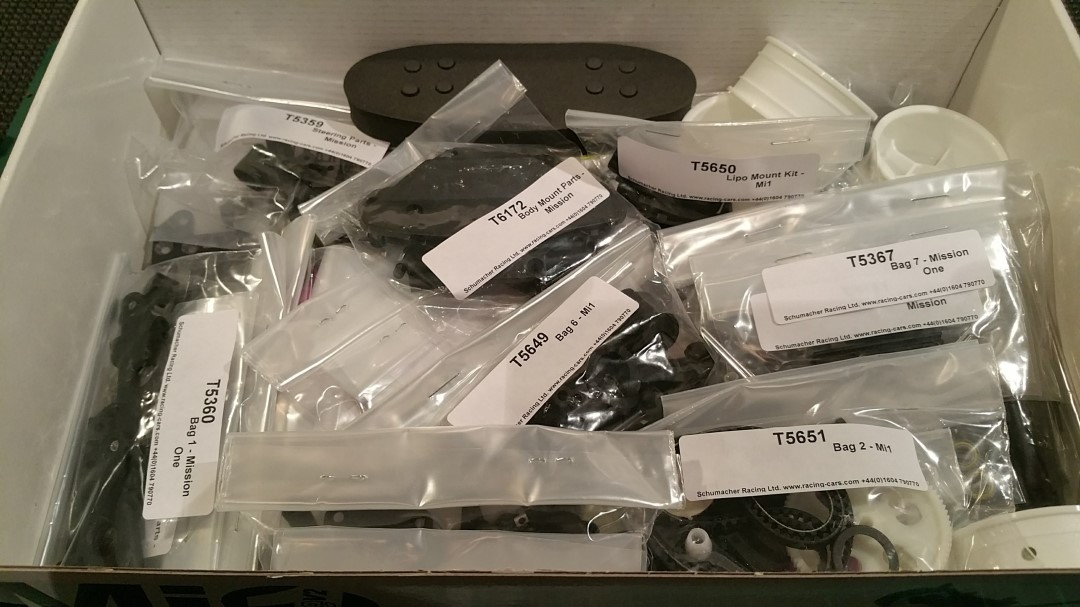 Well I have been at it again, after selling the beloved MK2 Escort in the summer, there was a gaping hole in the shelf where the Escort once sat. Iceman season was edging closer and closer and the temptation was simply too much in the end? The hunt for a chassis started to gather pace. I searched everywhere and looked at tons of ideas, but nothing really tickled my fancy. I really wanted a new chassis to build as opposed to a used one, so I was pretty limited to just Touring Car chassis’ as there really aren’t many options for a SOLID rally cars off the shelf that were under 200 quid. Naturally I chose a Schumacher chassis as a base for this project, so I ordered a new Schumacher Mi1V2 kit and some tyres to get started.

The Kit arrived next day as is pretty normal from those guys, I couldn’t wait to get home to start the build. On opening the box it didn’t seem as though there were many parts to it compared to what I am used to. She come together pretty swiftly taking about 3.5hrs to get all the bags built apart from the provided shocks which were not going to be used, I had already ordered some cheap TrackStar 68mm big bore threaded shocks from Hobbyking.

Gotta love building a new kit, its probably the 2nd best part of this hobby, first obviously being thrashing the pants off them on track! This particular kit was different as I had never owned or driven a proper Touring Car, I have an old TT01 Tamiya so that don’t count and the Basher RZ4 that I used for the Escort Build don’t really count either as that was modified off the shelf and was absent of any Roll Bars which meant it rolled around all over the gaff compared to this thing. This car is belt driven with a fixed centre drive and Ball Diffs both ends, the whole car is designed to be low, stiff and fast, so making it behave like a rally car should be simple….or so I thought.

1st Issue that I faced was the body posts, obviously most TC shells are based on a saloon car shape with a boot lid out the back, the ‘baru’ hatchback shape was never part of the thought process at Schumacher during development as its a fully fledged on road racer. The end result is body posts which are set too wide apart to exit via the flat roof section at the rear end of the hatchback shell, instead they were fouling the outer edges at its widest point. I had to find a way to move them inwards far enough to have the posts exit through the flat roof part. There are 2 torx screws that hold the post mounts to the rear shock tower, I flipped these inwards 180° so the inner hole was now the outer hole. The first try went badly as I had nowhere for the inner screw to hold onto. I searched the garage a bit and found some old tv aerial blades so I set about hacking them to bits to make some plates to assist in getting the body mounts in the right place.

2nd Issue is the lack of droop that the chassis has, now; for on road racing this is spot on, but for rallying we need at least double the normal ride height, and some extra droop to the let the wheels drop out the arches whilst off the ground and for traversing the bumpy bits. The wishbones on this car are different to what I have used before as the Hubs at the front don’t sit inside a hub carrier on a hingepin like most cars, the hub essentially floats between the upper and lower parts of the suspension arms, the lower wishbone uses a ball stud inserted into the wishbone with a long thread which screws into the hub from underneath. Again this is probably very efficient for on road stuff, but this setup limits the downward travel of the wishbones, as once the arm drops so far down from horizontal the bottom of the hub fouls the wishbone and it just stops right there, this problem is mirrored on the rear end too. I didn’t get time to address these issues before its first outing so look out for another post (once I’ve sorted the problem) on how I got round this issue.

3rd Issue which is unresolved for now also is the shock towers, due to the longer 68mm shocks I am using I had to compress them about 7-9mm just to get them to fit on the car, I used the schumacher grippa rod ends on the Trackstar shocks as opposed to the trackstar ones, as they needed a larger ball stud which I didn’t have at the time. In the future I will design a revised shock tower, but I will sort the droop out first to see how it is then.

My First Rally was the old faithful MK2 Escort, so I had my vintage/old school fix so this time I fancied something more modern that I don’t mind hammering the crap out of round the track. I looked at all sorts and decided the Hatch Back Subaru was a good shout as I had not seen many of them about and I like to try and be a little different where I can. I scoured the web for inspiration on the paint job and came across the 2014 Rally America – David Higgins Subaru WRX, this instantly got my attention because it looked as though I could have designed it for myself…… It was the right angular modern style that I like and it also the perfect colours to match the team and my current paint job on the Tekno Short Course Truck too ! 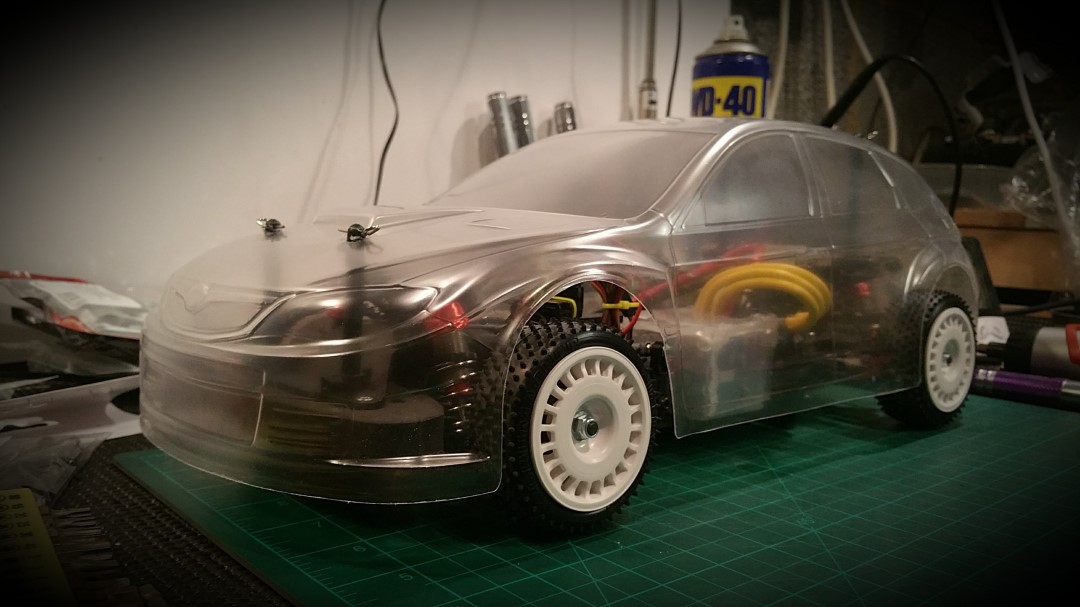 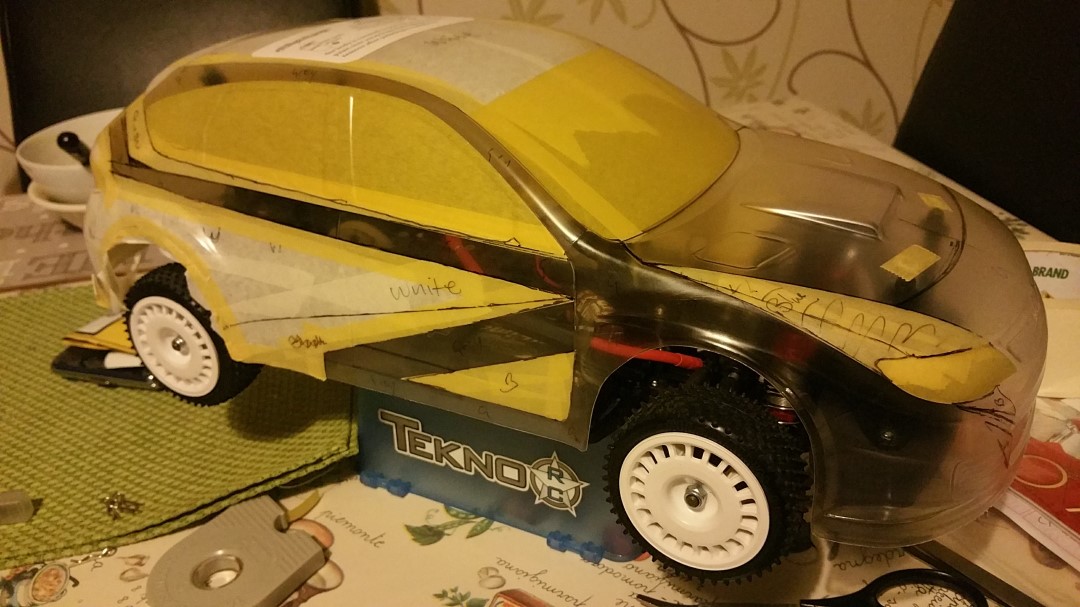 SO…. Shell located, ordered and soon delivered, time to set about getting some paint on this bad boy ! I was going to wait for the body to be finished before I sorted wheels but the trigger got itchy and nailed a ‘buy’ on the same Tamiya RS rally wheels I used on the Escort build, mainly due to the fact I knew the 24/25mm SST Rally tyres fitted the rims perfectly and they look like a nice scale representation of an actual gravel/off road spec wheel. I also could not resist going full “hoonigan” with a set of Fifteen52 Turbo Mac wheels in black with added turbo fans which looks the absolute ‘fo shizzle’ on the finished car and even better when spinning at a crazy rate of knots on the road/Astro!

Simple here, whatever I had knocking around, so it went like this.

So its built, it runs and its looks the dogs dilly dangles and she even caused a bit of a stir at its first outing taking the TQ and the WIN on the 1st round of the ICEMAN Series (post coming shortly). There’s a way to go with it yet but it will get there, for now its running a couple of DIY waterproof boxes for the ESC and RX along with some lexan side guards to try and keep some of the filth out of where the money goes, I even bashed together a couple of home brew rubber front mudguards for added ‘scale’ appearance which were surprisingly functional.

So enough waffle, you can see what it is, I will update the fixes as I go along the road to making this a proper little rally racer !